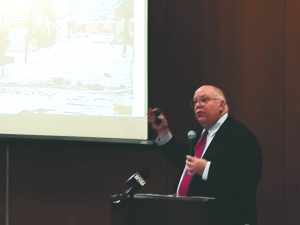 Skilling talks about signs that global warming is having a devastating effect on the planet. (Photo by Kevin Beese/Chronicle Media)

Too many concrete examples exist to show global warming is real, according to weatherman Tom Skilling.

During a climate-change program Saturday at Roosevelt University in Schaumburg, Skilling gave example after example of weather abnormalities that point to global warming. Wildfires in California, hurricanes battering the southeastern United States, Anchorage, Alaska hitting 90 degrees and Australia hitting a record 122 degrees all are examples of climate changes happening in the world, according to Skilling..

The WGN meteorologist said that even last winter’s polar vortex that gripped the area is proof of climate change. He said while Chicago and 16 other cities had record cold in that four-day January stretch, that same stretch produced record heat in more than 300 cities across the globe.

“That’s how you can tell the planet is warming,” Skilling said.

He said global warming doubters are simply ignoring the science that is all around them.

“You can’t say it’s innocuous and that we are dealing with it just fine,” Skilling said. “To think that is crazy.”

During Saturday’s “In Conversation: Congressman Raja Krisnamoorthi & Tom Skilling,” the Schaumburg representative said changing leadership at the top would go a long way to getting our country back on track in reducing carbon emissions.

“We need to elect someone who will keep up the Paris Climate Accord,” Krisnamoorthi said in regard to President Donald Trump opting to pull the United States out of the multinational agreement.

The 8th District congressman said that incentives such as the Investment Tax Credit, which reduces taxes 30 percent for the buyers of solar power systems, have to continue.

Skilling said that that steps need to be taken to reduce the rising water and earth temperatures.

“Life does not always survive climate change,” Skilling said, using Vikings as an example. “Huge mass exterminations have been brought about by climate change.”

He said America produces more carbon dioxide per capita than any other country on the planet.

The meteorologist said backing off requirements for more fuel-efficient vehicles, as has been proposed under President Donald Trump’s administration, is a bad idea.

“It would be equal to putting 200 million more cars on the road,” Skilling said.

“We have done in 100 years what it took nature thousands of years to do,” Skilling said of climate changes.

He said failing to act regarding climate change could put properties along America’s coasts in jeopardy. Skilling stated that more than $1 trillion in Florida real estate, including Cape Canaveral, as well as California’s Silicon Valley could disappear within the next century without action to combat global warming.

“This is not political,” Skilling said.

Krisnamoorthi said he has helped create the bipartisan Congressional Solar Caucus in the U.S. House, along with Republican Ralph Norman of South Carolina. The Schaumburg congressman said the caucus has proposed allocating $40 million to help eliminate the soft costs (installation, registration, permits, etc.) that keep people from converting to solar energy.

He noted the caucus has also proposed legislation that requires the U.S. military — the nation’s largest purchaser of energy and the country’s biggest polluter — to examine going to solar power.

Both bills are likely to be passed this year, according to Krisnamoorthi.