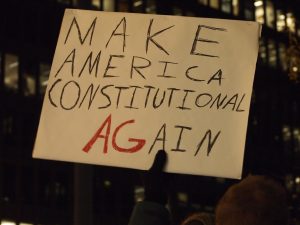 One of the many signs that were at the rally and march. (Kevin Beese/Chronicle Media photo)

Fearful that the forced resignation of U.S. Attorney General Jeff Sessions could lead to the firing of Special Counsel Robert Mueller, who is investigation possible collusion between Russia and Donald Trump’s campaign in the 2016 presidential election, an estimated 2,000 people marched on Trump Tower in Downtown Chicago.

The protesters started at Federal Plaza with a rally and then, armed with signs showing their outrage, marched along Dearborn Street and Wacker Drive until arriving across from Trump Tower.

Rabbi Michael Binyosa of Chicago said it was important for people to send a message that they will not stand for injustice. 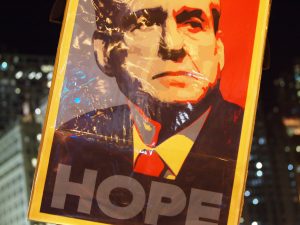 “We have an administration with only one aim: destruction, annihilation, terror, bigotry, racism, division, hatred,” Binyosa said. “With them, we have no trust, no future, no identity. They are unethical. Everything you can imagine, this regime stands for. It is not fit for this country.

Binyosa led protesters down Dearborn, frequently yelling to onlookers through a bullhorn, “Come join us.” 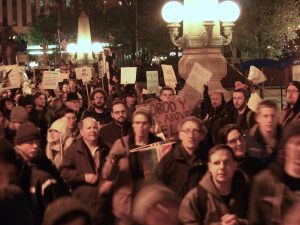 “This was a great start,” organizer Chris Kulfan of Chicago said, “but we have to make sure it continues. We have weeks and months to go in this fight.”

Protesters’ chants included “Wake up, Congress. Do your job” and “Whitaker must recuse.”

— Protesters in Chicago call for Congress to protect Mueller —