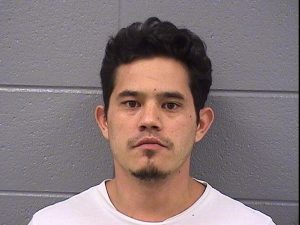 Two federal criminal indictments were brought against a total of 34 Latin King gang members, one group on Chicago’s far South Side and far south suburbs, the other in the western suburbs of Maywood and Melrose Park.

One indictment identified two specific Latin King operational areas. One is called “M-town,” mostly in Maywood in an area bounded by east of 25th Avenue on the west, 1st Avenue on the east, Lake Street on the south and North Avenue to the north in Melrose Park.

The other area, “18th and Bloomingdale,” is in an industrial area north of North Avenue.

The alleged leader of the M-town area is Piere Paolo Gennell, 30. He and the other 14 gang members named in the Maywood/Melrose Park indictment are charged with first-degree murder, and most of them also face racketeering charges related to murder and attempted murder.

As part of Maywood/Melrose Park, or “M-town” investigation, agents obtained a search warrant for a stash house on Kolin Avenue in the Gage Park neighborhood on the Southwest Side of Chicago. They obtained the search warrant after arresting an indicted a gang member there who was found in possession of cannabis and 10 marijuana plants.

Federal prosecutors paint a picture of a highly organized hierarchical criminal gang that is ruthlessly violent both in internal gang discipline and in its goal of gaining and maintaining territory for narcotics sales and other criminal activity.

The Latin Kings routinely use violence as an internal gang disciplinary tactic, against people who oppose their orders, and against rival gang members, and even police officers.

Just how indiscriminately violent the Latin Kings are was reflected in a shooting incident in February in Chicago’s Southwest Side Gage Park neighborhood, just 18 blocks from the gang stash house raided last week.

A 12-year-old boy playing tag on his driveway with friends was shot and critically wounded in a gang drive-by shooting. Police say the boy, who is not a gang member, did not respond to a call to flash a gang sign from a car that pulled up nearby. Someone in the car called out “Raise the Crown,” which means give the hand sign for the Latin Kings.

When the boy just stood there, he was hit in the chest by one of two shots fired from the car, which then sped off. The boy was rushed to Mount Sinai in critical condition.

For one local police chief, the latest gang arrests are the continuation of a long battle with as many s 31 separate criminal street gangs.

Since being formed in 2009, WEDGE, has proactively engaged gang activity in an area from Berwyn on the south to River Grove to the north and the DuPage County line to the west.

Weitzel said the success of Chicago’s own gang tactical efforts has forced his department and others in the city’s suburbs to up their game.

“(Gangs) really are under a tremendous amount of pressure from Chicago,” Weitzel said. “Tactical officers are hitting them hard. So many gangs are moving to the western suburbs.”

Weitzel said the gangs see the smaller suburban police departments as less street savvy and having fewer resources to deal with gang activity.

That assessment, he said, is wrong.

Weitzel has called WEDGE “one of the most effective gang and drug task forces in the state — if not the nation.”

With the help of federal law enforcement, Weitzel said, WEDGE is honing its skills and tactics.

Weitzel said that while the street gang has well-defined areas of operations and authority, individual gang members pay little attention to where they commit crimes.

“The Latin Kings know no boundaries. They have no idea if they’re in River Forest or North Riverside or Maywood.”

Weitzel agrees that the Latin Kings are particularly prone to and ready for violence.

“Almost all the Latin Kings we encounter have been armed,” Weitzel said. “They would not hesitate to fire on any police officer who threatens their territory and narcotics.”

According to federal prosecutors, that just what happened in July 2014.

Latin King Edgar Velarde-Saldana, 33, of the 900 block of N. 2nd Avenue in Maywood, is charged with the attempted murder a Melrose Park police officer in July 2014 while the officer was assisting FBI agents in an investigation.

A month later Velarde-Saldana allegedly attempted to kill a rival gang member in Maywood with a .45-caliber handgun.

“It’s about money and drugs, and violence used to protect that business,” Weitzel said.

Weitzel noted that the top leadership of the gang are not what people might imagine.

“What the average citizen doesn’t know is that high-ranking gang members, they hold jobs. They’re in the workforce with their neighbors,” he said. “They’re not the tattooed guy with no shirt on that you see on television.”
“The higher-ups, they lay low. They own property, homes with well-maintained lawns. Some have children that go to (neighborhood) schools.”

While drug sales are the primary business of the Latin Kings, local law enforcement officials say their criminal activities are far more wide-ranging.

Weitzel said the Latin Kings and other gangs have recently started engaging in targeted, well-organized retail theft, designed to support their drug operations.
“They’re targeted and calculated thefts, involving three or four people,” he said. Many times the gangs use juveniles, because the criminal penalties are lighter for people under 17.

“The thefts are large scale, from places like Walmart or Target, or high end jewelry and clothing stores,” Weitzel said.

Like the burglaries, the retail thefts are committed to support the gang’s drug trade.

“All of it goes back to narcotics sales,” Weitzel said.

Cooperation is key to enforcement

Weitzel lauded the ever-increasing increasing cooperation of federal law enforcement with state and local authorities, saying it is crucial to any successful efforts to combat gang crime.

While federal law enforcement can provide long-term investigative know-how and wide-ranging jurisdiction, it is local law enforcement that are the day-to-day “boots on the ground,” with institutional knowledge of local places and patterns.

“We’re very attuned to each other,” Weitzel said of federal and local law enforcement.

“WEDGE has a written mutual-aid agreement with the DEA and the ATF  (Alcohol, Tobacco and Firearms),” Weitzel said. They’re sharing intelligence with us. We can access intelligence from the FBI.”

“That intelligence is very important,” he stressed, adding that police “need to know who the players are to effect that enforcement.”

“They’ve opened up the training to local law enforcement,” Weitzel said. “We’ve done training with the FBI and the ATF and even the Secret Service (on credit-card fraud).”

Local cops are trained to spot hiding places in suspect vehicles, how to arrange for and set up “overhears,” also known as “wires.”

Local police are also taught how to properly write a search warrant and warrants needed to get court approval for wiretaps.