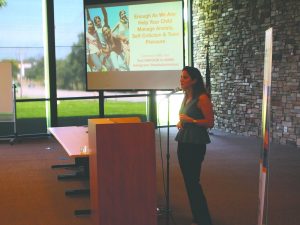 Author Rachel Simmons tells parents to continue to talk with their teens despite their eye-rolling and silence. “These are going to be difficult and tough conversations,” she said. (Photo by Kevin Beese/Chronicle Media)

One of the best things parents of teenagers can do is simply let them know that falling short of perceived expectations is not the end of the world, according to a bestselling author.

“Start the conversation with them letting them know that it is OK to not live up to what they think they are supposed to live up to,” said Rachel Simmons, author of “Odd Girl Out: The Hidden Culture of Aggression in Girls” and her latest work “Enough As She Is: How to Help Girls Move Beyond Impossible Standards of Success to Live Healthy, Happy and Fulfilling Lives.”

Simmons, also an educator and consultant for girls and women being more authentic, assertive and

resilient, addressed parents and educators at a Sept. 25 Glenbard Parent Series program at the Marquardt Administration Center in Glendale Heights.

She told audience members that her advice works equally well for boys, but that publishing houses like to target either males or females with books so that is how she got to be known as a writer for the parents of girls.

Simmons said pressure in constantly being placed on teens to be successful.

“No one should have to trade their values or self-worth in order for them to have success,” Simmons said.

She said it may not seem like you are getting through to your teen when talking with them, but keep doing it. Simmons likened it to continuing to put money in the bank. Eventually some of it is going to be withdrawn, she said.

“These are going to be difficult and tough conversations,” Simmons said. “You are not going to get a ‘Thank you so much, Mom and Dad. That’s going to change my life.’” 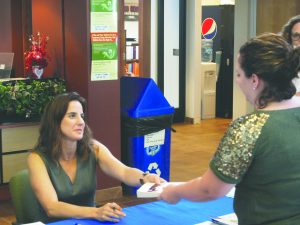 Simmons hands a signed copy of her book “Enough as She Is: How to Help Girls Move Beyond Impossible Standards of Success to Live Healthy, Happy and Fulfilling Lives,” to an attendee of her talk in the Glenbard Parent Series. (Photo by Kevin Beese/Chronicle Media)

Still, keep talking with them, Simmons said. However, stop short of trying to fix their life for them and definitely stop short of talking about what you did in high school in a similar situation, she said. Those turn teens off, she said.

Showing empathy and just listening can work wonders, she said.

The author said that the stress of success has gotten so intense that middle-school students are starting to worry about college admissions.

“They think if you don’t start a nonprofit, are an entrepreneur or pull a kid out of a burning building by the time you are 11 or 12, you are not going to have anything to write about for your college essay,” Simmons said.

She said boys are socialized by the wider culture, which is why many hide their vulnerabilities and emotions. That is what causes some boys to turn to rule-breaking and delinquency in their teen years, Simmons said.

Girls, she said, are expected to internalize things, to not show disappointment. That leads to anxiety and other issue, according to the author.

Simmons said girls having meltdowns on Sunday nights and not wanting to go to school are signs of individuals failing to live up to their own perceived expectations. 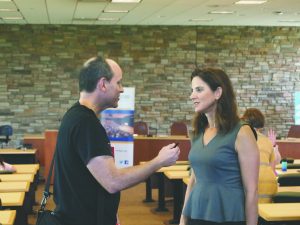 Author Rachel Simmons talks with Glenbard East counselor Bryan Witte after her presentation on helping teens cope with the stress they face. Simmons spoke Sept. 25 at the Marquardt Administration Center in Glendale Heights as part of the Glenbard Parent Series. (Photo by Kevin Beese/Chronicle Media)

She said because of society’s pressure to succeed, teens can think they are the only one in their circle of friends or school not keeping up. Simmons said the societal drive for success can also leave teens thinking that they have to be perfect in every single thing they do.

“They are constantly holding themselves to an ideal that they are going to constantly miss,” Simmons said. “Nothing ever feels good enough or if they do achieve something, they need to immediately move on to the next thing. It is impossible for them to always go and get the next thing.”

“Tell them, ‘It’s not your fault,’” the author said. “… Let them know ‘It’s not on you,’ that it’s a symptom of what is happening culturally.”

Simmons said multiple Advanced Placement classes may not be for every student. Some students, she said, are taking the classes because their perception is that they are supposed to or that it is the only route for them to get into college.

“Ask them ‘What do you care about? When do you feel engaged in school?” Simmons said.

She said if the subject of the AP course doesn’t come up when they are talking about feeling engaged in school, they could be taking the course for the wrong reason.

Bryan Witte, a counselor at Glenbard East High School in Lombard, left the program with Simmons’ latest book under one of his arms. He said he got the book to help enrich him professionally, but also to help him as a parent with two girls about to hit adolescence.

“It was good to hear about the standards teens think they have to meet,” Witte said. “… I thought it was a wonderful presentation.”