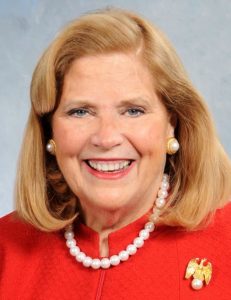 Bellock has served in the General Assembly since 1999 and will retire from the House of Representatives where she became the first woman to serve as Deputy Minority Leader in 2013.

“Illinois is so fortunate to have an advocate for health and human services as dedicated and talented as Patti Bellock,” said Gov. Bruce Rauner in announcing the appointment. “She has been instrumental in virtually every health advancement our state has made in the last two decades and I am looking forward to her leadership of the state’s ongoing effort to reform our delivery systems and improve our outcomes.”

She is a member of two other Medicaid-related groups moving legislation forward to approve the Hospital Assessment and the Omnibus Medicaid bill. She also co-led efforts in the General Assembly in recent years to move Illinois toward managed care.

“It is an honor to join the talented and dedicated staff of the Department of Healthcare and Family Services,” Bellock said. “I look forward to working with the Governor and my colleagues in the General Assembly to ensure access to quality health care for Illinois’ most vulnerable population and making our health care delivery systems more efficient and effective.”

Bellock’s signature achievement in the General Assembly was the landmark Save Medicaid Access and Resources Together (SMART) Act reforms of 2012. She served as chairperson of the Medicaid Reform, Family & Children Committee from 2009-11 under Speaker Michael Madigan; the group which started the work on improving Illinois’ Medicaid program that culminated with passage of comprehensive reforms in 2012.