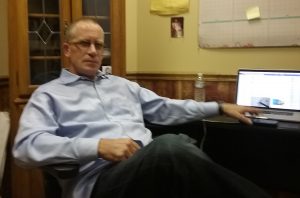 Tim Ryan, a recovering heroin addict, sits in his Naperville office. Ryan turned his life around after getting drug treatment in prison. He has been active in 1,500 drug interventions over the past three years. (Photos by Kevin Beese/Chronicle Media)

Two prayer cards are next to the calendar in Tim Ryan’s Naperville office, a constant reminder of the two sons he lost to heroin overdoses: one his actual son, the other his son’s best friend who worked for Ryan and his addiction recovery service.

Ryan, a former heroin addict, must wrestle with the fact daily that he contributed to his actual son’s death. Rather than being a father to his son, Ryan admits, he was a drug buddy, even doing heroin with his son, Nick, during the height of Ryan’s own addiction.

“I have to admit that I helped kill my own son,” Ryan said.

A lifetime of drinking and drugs had Ryan on a path of destruction. He overdosed eight times, was pronounced clinically dead three times and suffered two heart attacks. He was arrested 10 times and served time in prison. He lost his home, his wife and millions of dollars he had made as a high-level job recruiter.

“I spent $1.5 million (on drugs) in 12 years, easily,” Ryan said from his basement office near downtown Naperville.

Despite his high-salary job as a recruiter, his wife, Shannon, who he still calls his best friend, went back to school to get her nursing degree, seeing the destructive path down which Ryan was heading. Ryan missed her graduation because he was “heroin sick.”

It was not until Ryan wound up in Sheridan Correctional Institute, one of the few Illinois prisons with a detox and active recovery program, in 2012 as prisoner R68915 that he turned his life around. Sentenced to seven years, he served 13½ months.

In those 13 months, he and his roommate at the prison both poured themselves into recovery, learning as much as possible about the recovery process and the resources available.

On Nov. 1, Ryan will mark five years clean and sober.

Upon getting out of prison and with financial help from his mother, he started a foundation, A Man in Recovery, being a clearinghouse of information for addicts, families, treatment programs and sober houses.

He now works connecting addicts with the resources they need to turn their lives around. He has written a book, “From Dope to Hope: A Man in Recovery,” appeared on national radio and television shows and was an invited guest of President Barack Obama at the 2016 State of the Union Address. 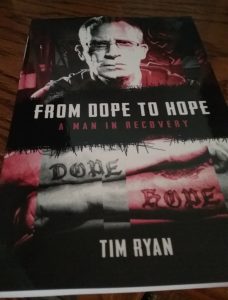 He travels the country giving talks about the power of heroin and why we can’t ignore the problem any longer. Ryan gets a driver for events, not because of his celebrity status but because his driver’s license has been revoked from driving under the influence convictions.

He has been involved in more than 1,500 interventions in the past three years.

“I walk in and tell them, ‘You are either getting treatment or I am helping pack you a bag,’” the blunt, straight-forward Ryan said. “I’ve only had three people not get treatment.”

The A&E television channel ran a one-hour special, “Dope Man,” on Ryan’s anti-heroin efforts. He said talks are ongoing about turning his efforts into an A&E series.

The Naperville man calls the Drug Abuse Resistance Education program an “utter failure” and said far more must be done to get youths attuned to the addicting nature of heroin and other drugs. A program he created, “The Cop and the Convict,” gives youths a much more realistic view of drugs, having them hear from both law enforcement and a former user (himself), according to Ryan.

Ryan said his heroin addiction started with a chance meeting at a friend’s house. A friend of his friend offered him a bag of heroin.

“That one bag turned into a 12-year addiction,” Ryan said.

He said a key step in fighting heroin is to change the perception of who heroin users are. He said most people think of heroin users as low-income minorities with a needle in their arms in an alley.

Ryan said he has dealt with addicts as young as 12 and as old as 78.

He said people keeping their heads in the sand or staying mum about a child’s addiction to save face in the community is nonsense.

“We have an epidemic here,” Ryan said. “People don’t want to talk about what the effect of this is. I think it’s better if we talk in the community about what is happening in people’s lives rather than us burying more people.”

Information on Ryan’s A Man in Recover Foundation can be found at www.amirf.org.

— Naperville man fights to get addicts off heroin—