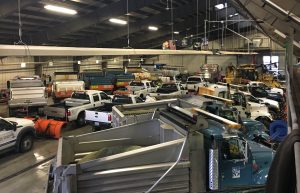 When Carol Stream village officials made the recent commitment to transition their vehicle fleet to B20 from standard ultra-low-sulfur diesel, it was for the betterment of the environment and the health of the community, including municipal employees.

The commitment also supports the goals of the 2016 Metropolitan Mayors Caucus’ “Greenest Region” compact, of which Carol Stream is a signatory.

This is according to Sam Barghi, public works management analyst for the Village of Carol Stream, and the American Lung Association, which partnered with the Illinois Soybean Association checkoff program to guide the transition to B20, a cleaner-burning, cost-efficient, 20 percent biofuel blend derived from soybean oil.

“This commitment helps synthesize the sustainability goals of the community with regional, state, national and global objectives for the future,” said Barghi. “Our village board was challenged to assess what we could do to be good stewards for not just the environment but our community as a whole, while maintaining the high levels of service our residents expect and deserve, providing a safe and healthy workplace for our employees, and also being mindful of taxpayers’ dollars.”

The result was Carol Stream’s “green garage” initiative, which quickly identified B20 as a viable solution that met all of the public works board’s criteria for achieving greater environmental and public stewardship. As a new ISA “B20 Club” (www.b20club.org) member, the Village of Carol Stream joins a growing group of Illinois-based organizations fueling their vehicle fleets on B20. The club’s members use a combined 4.6 million gallons of B20 on average annually, contributing to cleaner air and more sustainable operations throughout the state.

Carol Stream’s 44 municipal vehicles and five generators burn through more than 14,500 gallons of diesel fuel annually. Among the fleet vehicles are light and heavy-duty trucks, backhoes, loaders, mowers and UTVs. The transition to B20 from standard diesel will prevent the release of nearly 25 tons of carbon dioxide per year into the environment, while allegedly providing operational benefits such as improved engine performance and lower maintenance costs.

“We’re going to be taking oil samples when we do oil changes, and send them to a lab to see if there are any changes with the different [lubricant] factors of B20,” said Andrew Olsen, garage supervisor for the village. “We are very early into this, and are waiting to see the results. We know from talking to other communities in the B20 Club that B20 is cleaner for the lines and tanks, but that is all we know for sure right now. We are working towards our own results and determinations.”

Olsen is excited that his garage personnel will be exposed to less carbon dioxide when working on, in or around village vehicles and machinery. “It’s going to be beneficial to our mechanics and our street division. B20 is a cleaner burning fuel that, in a closed building or outdoors, will provide better air quality in and around our shop,” he said.

Pete Probst of Indigenous Energy, who works with the ISA on biodiesel initiatives, helped guide the village’s B20 transition. He partnered with Carol Stream’s public works department to test fuel tanks and generators in preparation for the switch, along with overseeing tank cleaning to ensure optimal performance of the new fuel system. The village’s association with Probst and the B20 Club saved over $10,000 in start-up costs and services associated with the fuel transition, according to Barghi.

“This transition would have been impossible without those up-front costs being covered, and the expertise that was lent to us. Those costs would have been a barrier,” he said.

The village’s transition to B20 began in earnest in 2017, when Probst began the exploratory work that preceded the switch. “If there are any kind of fuel-related problems, biodiesel usually takes the blame. So we wanted to make sure we started with a clean slate,” Probst said. “To start the program we basically cleaned all the tanks, and later worked together to determine a monitoring and preventive maintenance schedule in order to keep fuel quality good.”

Probst’s Indigenous Energy company was instrumental in overseeing the Chicago Park District recent transformation to biodiesel for its garbage trucks and other municipal vehicles. Many of Chicago’s fleet vehicles are now capable of operating on biodiesel blends as high as 80 to 100 percent, Probst said.

“This is definitely a long-term commitment,” he said. “We are working closely with our partners to make sure this program is successful not only for us, but can be replicated in other municipalities. We would like to provide a model for other communities looking at B20 down the road.”

Since the recent switch to B20, all fleet vehicles and generators are running smoothly and with no noticeable difference in performance, reported Phil Modaff, Village of Carol Stream public works director.
“By switching to biodiesel, this community demonstrates its dedication to using efficient, reliable and cost-effective fuel that supports their environmental and sustainability efforts,” said Rebecca Richardson, ISA biodiesel lead, in a Dec. 5 news release. “They are a great addition to our B20 Club family of fleets.”