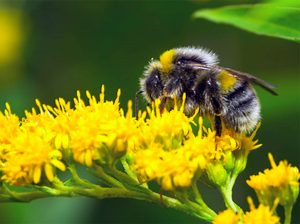 A bumble bee pollinates a flower.

Just 20 years ago, the rusty patched bumble bee was a common sight in Kane County, so ordinary that it went almost unnoticed as it moved from flower to flower, collecting nectar and pollen.

But the species, now balancing precariously on the brink of extinction, has become the first-ever bumble bee in the United States — and the first bee of any kind in the contiguous 48 states — to be declared endangered.

The U.S. Fish and Wildlife Service formally listed he rusty patched bumblebee (Bombus affinis) as endangered on March 21. The designation has been in the works since January.

“Listing the bee as endangered will help us mobilize partners and focus resources on finding ways right now to stop the decline,” Melius said.

“The rusty patched bumble bee is among a group of pollinators — including the monarch butterfly — experiencing serious declines across the country,” Melius said. “Why is this important? Pollinators are small but mighty parts of the natural mechanism that sustains us and our world. Without them, our forests, parks, meadows and shrublands, and the abundant, vibrant life they support, cannot survive, and our crops require laborious, costly pollination by hand.”

Kane County and area conservation groups have taken a number of proactive measures to support pollinators habitats. In October, for example, the Forest Preserve District of Kane County, Campton Township, Dundee Township, Fermilab and the Fox Valley Park District joined forces with The Conservation Foundation on a $250,000 project to restore the monarch habitat along the Fox River.

Also last year, Kane County hosted a bee-keeping town hall meeting to look at possible adoption of local ordinances regarding beekeeping and to discuss how beekeepers and local government can work together to develop and sustain the bee population.

Like other bees, rusty patched bumble bees pollinate many plants, including economically important crops such as tomatoes, cranberries and peppers. Bumble bees are especially good pollinators; even plants that can self-pollinate produce more and bigger fruit when pollinated by bumble bees. Each year, insects, mostly bees, provide pollination services valued at an estimated $3 billion in the United States.

Since 2000, rusty patched bumble bees have been reported in Illinois, Indiana, Iowa, Maine, Maryland, Massachusetts, Minnesota, North Carolina, Ohio, Pennsylvania, Tennessee, Virginia and Wisconsin, and Ontario, Canada. Some populations are so small that it is unclear whether they still exist.

Causes of the decline in rusty patched bumble bee populations are believed to be loss of habitat; disease and parasites; use of pesticides that directly or indirectly kill the bees; climate change, which can affect the availability of the flowers they depend on; and extremely small population size. Most likely, a combination of these factors has caused the decline in rusty patched bumble bees.

Melius says there are steps the public can now take to help pollinators like the rusty patched bumble bee. Plant native flowers, even in small plots in urban areas, using a variety that will bloom from spring through fall. Limit or avoid use of pesticides if possible, and always follow label instructions carefully. Foster natural landscapes and leave grass and garden plants uncut after summer to provide habitat for overwintering bees.

The rusty patched bumble bee once lived in grasslands and prairies of the Upper Midwest and Northeast, but many of those areas are gone. The bee gathers pollen and nectar from a variety of flowering plants. It emerges in early spring and is one of the last bumble bee species to go into hibernation in the fall. Because it is active so long, it needs a constant supply of flowers blooming from April through September.

Rusty patched bumble bee colonies rely on survival of their queen bee, the only member of the colony that survives the winter. In spring, a solitary queen emerges from hibernation, finds a suitable nest site and lays eggs fertilized the previous fall. Worker bees hatch, and the colony grows. New queens replace the old, all workers die and the cycle repeats.

More information about the rusty patched bumble bee, the rule listing it as endangered, and ways to help this species and other pollinators is available at https://www.fws.gov/midwest/endangered/insects/rpbb/index.html