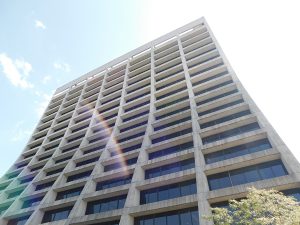 The Fermi National Accelerator Laboratory was founded in 1967 under original director Robert Rathbun Wilson with groundbreaking for the first permanent building in 1968.

It was a day for both big science and bison.

Fermilab threw open its doors for a community celebration last Saturday with a daylong open house marking 50 years of cutting edge particle physics research along with looks at the federal laboratory’s past, present and future.

Plus, there was the chance see the facility’s famed resident buffalo herd.

Around 20,000 persons signed up in advance and even more were expected to show up. But all were welcomed on a spectacular summer-like day with sunny skies and temperatures hovering in the 90s.

Instead, Fermilab’s original and continuing mission is pure research into the mysteries of what the universe is made of and how it works. An estimated 4,000 scientists from more than 50 nations collaborate with Fermilab on research and projects.

“Fermilab was created and has as its main mission as doing particle physics research, basic research into elementary particle physics,” said Dr. Bill Freeman, a senior engineering physicist and Saturday tour guide who started working at Fermilab in 1983. “(That’s) where we study the basic constituents of matter, the components that make up the proton and the forces with which those objects interact. 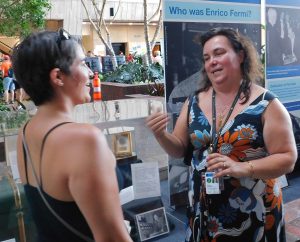 “That’s really our focus, to understand what makes up you, me, the stars, the galaxies, all the matter in the universe.”

A Fermilab spokesman said the open house not only drew visitors from the immediate area but throughout the metropolitan region and even from out of state.

In fact, so many people arrived at the scheduled 10 a.m. opening that traffic inside the property slowed to a stop-and-go pace, with occasional standstills on the two-lane roads. There were delays of up to 45 minutes to park before the initial crush of visitors was accommodated.

But the delays were worth it once visitors arrived at Wilson Hall, Fermilab’s centerpiece building.

Among Saturday’s activities were a bird’s eye tour from Wilson Hall’s 15th floor, tours of a technical campus and heavy assembly building, a STEM fair as well as a look into Fermilab’s Linear Accelerator Gallery. 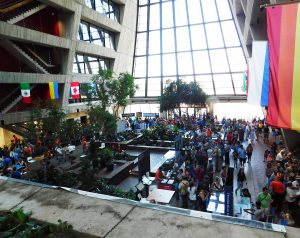 There were also 20-minute live telecasts from Switzerland’s CERN laboratory, a live connection to a Chilean mountaintop and the search there for dark energy plus a look at Fermilab’s next big project, the Deep Underground Neutrino Experiment and a connection to a high-tech lab in South Dakota.

Fermilab is named for Italian physicist and immigrant Enrico Fermi, who helped achieve the first self-sustained nuclear chain reaction at the University of Chicago in 1942. His work helped lead to the creation of the first atomic bombs and ushered in the post-World War II nuclear age. Fermi died in 1954, two decades before the lab was named in his honor.

“I brought (the display) down to my main conference near Los Alamos (N.M.) and the Italians there said ‘(Fermi) would be looking down on all of feeling part of him would be at these conferences and that he would be happy.’ ” 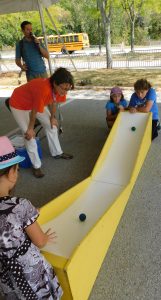 PHOTO 6
Children who visited during the Fermilab 50th anniversary open house on Saturday, Sept. 23 learn about particles colliding as they aim to hit balls together. (Photo by Jack McCarthy / Chronicle Media)

The Fermi National Accelerator Laboratory was founded in 1967 under original director Robert Rathbun Wilson with groundbreaking for the first permanent building in 1968.

Fermilab’s development erased the village of Weston, Ill., once projected as a 50,000-resident community but which voted itself out of existence to provide the site.

Fermilab is one of 17 national laboratories under supervision of the U.S. Department of Energy. It’s one of two in and around DuPage County, including Argonne National Laboratory in Lemont.

Fermilab’s first claim to fame was the Tevatron Collider, the ground-breaking particle accelerator that measured four miles in circumference and operated from 1983-2011. It was decommissioned when the larger CERN accelerator opened in Europe.

That left Fermilab seeking a new mission for a short time before settling on the Deep Underground Neutrino Experiment and research on the elusive neutrino, a tiny and rare particle that could have played a major role in creating the current universe.

As the project advances, researchers will use detectors at Fermilab and another 800 miles away in South Dakota to explore how neutrinos change as they pass through the earth. 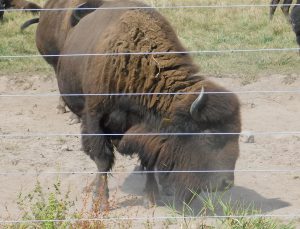 One of the facility’s resident bison has lunch in a pasture dedicated to Fermilab’s most famous residents. (Photo by Jack McCarthy / Chronicle Media)

Suburban housing, office and light industrial development bumps up to the Fermilab but beyond the property line is a quiet landscape of woodlands, restored prairie and nature paths, plus a farm and pasture for bison to roam.

“Fermilab’s original director, Bob Wilson, was from Wyoming,” Freeman said. “Wyoming being kind of on the frontier, he viewed Fermilab as being on the frontier of particle physics. So he wanted to make the connection … and that’s why we have bison here. They’re quite the calling card here at Fermilab.”

Fermilab also claims more than 280 species of birds, 60 species of butterflies as well as coyotes and turtles.

Original houses from Weston and surrounding farms have been grouped together on the east side of Fermilab and serve as residences and offices.

Fermilab has hosted modest open house events in the past, but most have drawn no more than 3,500 visitors.

Planning for last Saturday’s event began more than a year ago and more than 900 people — including 800 employees— volunteered to help supervise tours, assist in parking, answer questions and direct guests to far-flung buildings on Saturday.

Guests are also welcome to return to Fermilab for free, self-guided tours. Wilson Hall and the 15th floor observatory is open daily from 8 a.m.-4:30 p.m. weekdays and 9 a.m.-3 p.m. Saturdays and Sundays.