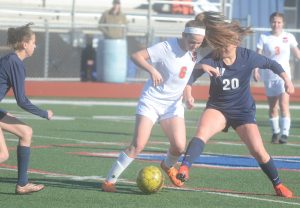 DuPage County has once again ranked among the healthiest counties in Illinois, according to a study by the Robert Wood Johnson Foundation.

Other area counties aren’t too far behind. DuPage is ranked ranked tops in Illinois in Health Factors and second in Health Outcomes among the state’s 102 counties.

County rankings are based on quality of life factors such as longevity and overall health status, including physical and mental health. Health Factors (how healthy we can be) and Health Outcomes (how healthy we are).

Kendall County was ranked third in Health Factors and seventh in Health Outcomes. Kane County was sixth and 36th, respectively.

DuPage County has been in the top five in both categories for several years and is currently ranked Number 1 in Health Factors and Number 2 in Health Outcomes among the 102 counties in Illinois.

“We are very proud to be among the healthiest counties in Illinois,” said Karen Ayala, DuPage Health Department Executive Director. “The high rankings are a direct result of our strong healthcare partners and other services provided to residents that support healthy living.”

The report,  available at www.countyhealthrankings.org/,  includes interactive maps that offer an overview of the county health rankings in Illinois.

During Aurora’s Spring Break, March 25-30, downtown museums are expanding their hours and offering discounts for visitors.

Aurora Historical Society and Aurora Public Art, both located in the David L. Pierce Art and History Center at 20 E. Downer Pl., will offer free admission as usual. Aurora Public Art will offer a drop in family art project from noon to 4 p.m. Wednesday through Saturday.

Aurora Regional Fire Museum will have expanded hours. They will be open the entire week from 10 a.m. to 4 p.m. Monday through Saturday.

Visitors may purchase a $10 pass allowing them to visit both the fire museum and Scitech during spring break week ($15 value). Passes may be purchased at either museum.

Alumni and retired staff from Elgin High School are invited to attend an All-Class Reunion on Saturday, April 13 as part of celebrations to mark the 150th anniversary of the school.

Both the current Elgin High School, at 1200 Maroon Drive, and the previous EHS building, now the District’s Educational Services Center at 355 E. Chicago St., will be open for visits from noon to 1:30 p.m on Saturday, April 13.

Attendees will then be urged to gather in the auditorium of the current EHS for a free program starting at 2 p.m. that will include a brief presentation on the history of the school, which opened in 1869 at Kimball and Center streets with 12 students.

The EHS band will perform a musical work especially commissioned for the occasion, written by EHS Band Director Robert Sanchez. A granite marker, created by Elgin Granite Works, will be unveiled outside the auditorium’s doors, and the high school choir will sing “Alma Mater.”

After the ceremony, attendees will be dismissed to catch up over refreshments at tables organized by graduation year or decade in the Fieldhouse and Commons.

Alumni and retired staff who want to know more about the All-Class Reunion are directed to the EHS150 website. More info can also be found on the EHS150 Facebook page.

An Aurora man was arrested after a dispute with a neighbor ended with another man shot.

According to an Aurora Police Department news release, Abelardo Ramos, 26, of Aurora was arrested on March 17 for Aggravated Battery with a Firearm after he approached his next-door neighbor over alleged inappropriate comments made toward Ramos’ girlfriend.

According to reports, Christian Aguilera, 23, of Rolling Meadows, arrived at a home in the 100 block of South Lincoln Avenue and made a disparaging remark to about Ramos’ girlfriend, who informed Ramos of this insult.

Ramos reportedly confronted Aguilera while brandishing a pistol, at which time a fight ensued.

During the struggle, Aguilera was shot twice in the leg, police said.

At 10:38 p.m. Sunday, March 17, Aurora police and paramedics were called and responded to the scene. An HK 9mm pistol was recovered, and Ramos was taken into custody. He was charged with two counts of Aggravated Battery with a Firearm (Class X Felony).

Aguilera was taken to a nearby hospital where he was treated and released for non-life-threatening wounds.

The team, along with their coach Don Zabelin, will now compete at the LifeSmarts National Competition in August, in Orlando, Fla.

The national competition features several rounds of competition including individual tests, creating a public service announcement, and solving challenges in 10 different LifeSmarts topic areas. The top 16 teams will then compete in a single elimination quiz bowl competition to determine the national champion.

The Spring Yard Waste Collection program runs from Monday, April 1 through Friday, April 12. During these two weeks, residents do not have to use waste stickers to dispose of yard waste.

Yard waste must be placed in a 30-gallon kraft paper bag and not exceed 60 pounds. Yard waste mixed with garbage or yard waste in a garbage can or plastic bag will not be collected.

Beginning Monday, April 15, a waste sticker, which is the same one used for excess garbage, must be attached to the bag.

Waubonsee Community College will host its annual Spring Career Fair on Thursday, April 11 from 10:30 a.m. until 1 p.m. in the Academic and Professional Center on the Sugar Grove Campus. The event is free and open to the public.

More than 75 employers, all with jobs, summer positions, or internships available, will be on hand to meet with people and discuss employment opportunities. Because interviews will be conducted at the fair, attendees are encouraged to dress in professional attire and to bring several copies of their résumé.

The career fair is held in coordination with the Illinois Department of Employment Security.

Visit www.waubonsee.edu/careerfairs to register and for more information, including a list of participating employers.

More Illinois public high school graduates left the state for college in 2017, according to a report by the state of Illinois.

Outmigration data shows that of all public high school graduates in 2017, one out of five (20.3 percent) signed up for classes at out-of-state colleges and universities

Looking specifically at the number of college-bound public high school graduates who enrolled in a four-year institution, nearly half, or 48.4 percent, out-migrated.

For additional context, in 2002, only 29.3 percent of the four-year college-going Illinois public high school graduates enrolled outside the state. That’s an increase of more than 19 percentage points and by nearly two-thirds (65.2 percent).

The bright spot in these numbers indicates that there has been noticeable enrollment growth was at Illinois’ community colleges, where 2,477 more public high school graduates began classes than in 2016.