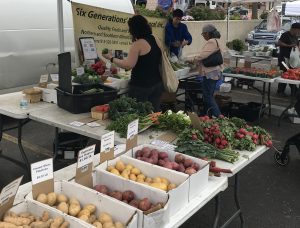 Upon further review, it was the father eagle that was reportedly killed by a car while recently trying to gather up some road kill near a nest at Mooseheart Home.

The mother eagle, originally reported as killed in the accident, is alive and well and taking care of her eaglets.

The saga of the Mooseheart American bald eagles was chronicled in a Suburban Chronicle story last week and drew wide attention on social media and in other outlets.

According to various reports, the dad was originally — and incorrectly — said to have picked up care and feeding duties for the eaglets, who are reported to be close to leaving their next near Mooseheart Road on the south edge of the campus.

Bail was set at $750,000 last week for an Ohio truck driver charged with attempted murder and several gun offenses for shooting at another trucker on June 8 in Hampshire.

Kane County prosecutors allege that at about 4:45 p.m. on June 8, William M. Lutz, 57  was at a truck stop on U.S. Route 20 in Hampshire when he began to argue with the victim because Lutz believed the victim’s vehicle was blocking the road.

Lutz went to his semi-truck and retrieved a .45-caliber handgun.

One bullet grazed the victim, causing bleeding. The other bullet struck the truck, causing damage.

Lutz left the scene in his semi-truck, parked on the side of the road at Illinois Route 47 and Interstate 90 and consumed 30 pills in an apparent suicide attempt. Police found Lutz a short time later and took him into custody.

The Illinois Environmental Protection Agency is warning those who go on the Fox River about about blue-green algae. It’s naturally occurring algae, but when there’s a lot of it, it can make you or your pets sick if you come into contact with it or accidentally get a mouthful of river water.

Help prevent algae blooms by reducing the use of fertilizers on your lawn. If you choose to feed your lawn:

These simple steps will help all the waterways in town, from the river to the retention pond in your backyard stay a little fresher.

Woman who died in crash on Farnsworth identified

The Kane County Coroner’s Office has identified the driver who died on June 10 in a crash on Farnsworth Avenue after attempting to flee police.

The Coroner’s Office said Marcie Lopez, 49, of Aurora, was pronounced deceased at the scene of the crash.

According to the Kane County State’s Attorney’s Office, a Kane County sheriff’s deputy attempted to make a traffic stop at around 8:15 p.m.on June 10, on a white Mercury SUV in the area of Mountain Street and Farnsworth Avenue.

The driver of the Mercury was ejected from the vehicle and pronounced dead at the scene. The driver of the Jeep was extricated and transported to a local hospital. No other individuals were involved.

The condition of the Jeep driver was not known.

Lopez was transported to the Kane County morgue, where an autopsy was conducted on June 11. Toxicology samples were collected at the time of the autopsy and sent to a forensic lab for analysis.

The Aurora Police Department is conducting the accident reconstruction investigation.

In accordance with state law, the Kane County Major Crimes and Officer Involved Death Task Force is conducting the investigation into the incident.

A section of the Fox River Trail in Geneva will close for a two-week period through June 24, as it’s scheduled to be resurfaced.

The project will cause a stretch of the trail from the Geneva Water Treatment Plant to south of Fabyan Parkway to close as work is completed. The area of closure will extend two miles.

Evans and Son Blacktop, Inc. will be conducting the resurface work.

Signs will be placed on the trail to notify the public of the area of closure.

The Forest Preserve District asks trail users to exercise caution and be mindful of the closures as the work is completed.

Bail has been set at $800,000 for a Carpentersville man accused of attempted murder and related offenses for stabbing someone he knew in the chest.

Kane County prosecutors allege that Rivera, who worked for the victim’s roofing business, and had called the victim the morning of June 11 asking to be paid.

The two met at about 9 a.m. June 11 outside of Rivera’s home in the 2100 block of Tepee Avenue, Carpentersville. The victim was seated in the driver’s seat of his vehicle.

Unprovoked, Rivera reached through the car window and stabbed the victim in his left chest near his heart, as well as his right hand, using a serrated knife with a blade longer than 3 inches. The victim required life-saving medical treatment and remains hospitalized, officials said.

If he posts bond, Rivera cannot have contact with the victim or witnesses in the case, cannot consume any intoxicating substances, and must surrender his guns and Firearm Owners Identification Card.

The Batavia Police Department is seeking the public’s help located two men who robbed a liquor store on June 19 while carrying a baseball bat.

According to Batavia police, officers were dispatched at 10:50 p.m. last Wednesday to a liquor and pantry business in the 1300 block of Wind Energy Pass for a report of an armed robbery in progress.

Upon arrival, officers spoke to an employee who stated that two male subjects entered the business dressed in all black clothing and wearing ski masks.

The employee said one subject was carrying a baseball bat.

The subjects demanded and received an unknown amount of cash and a bottle of alcoholic liquor. The subjects fled on foot from the area in an unknown direction. Officers were unable to locate either subject.

Both subjects were described as around 5 feet 6 inches and 160 pounds. No other description was provided. The store employee was not injured during the incident.

Kane County will host a June 19 cybersecurity seminar targeted to manufacturers who are or want to be defense contractors and subcontractors.

The event — cosponsored by Kane County and numerous partners, including Chicago Metro Metal Consortium, Chicago Regional Growth Corporation, Illinois Defense Network, IMEC and others — will help companies identify the risks facing your company as well as how to address and resolve potential security threats aimed at your products, customers and employees.

By attending this half day event, manufacturing leaders — with a particular emphasis placed on current and future defense contractors and sub-contractors — will learn more about risk management considerations and how to integrate an effective cybersecurity approach and mitigate the risks of cyber threats.

The department of defense mandates specific risk controls. How are you implementing these in your operations?