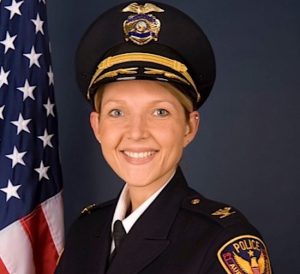 Thanks to hard work and collaborative efforts by both police and the community, shootings in Aurora have dropped nearly 45 percent during the first six months of 2016, compared to the same time period last year, according to recently released Aurora Police Department statistics.

“While we can never say for certain what causes a reduction, there are several variables that I believe have contributed. The first of which is the newly developed Problem Oriented Policing (POP) sessions,” Ziman said.

POP sessions have replaced traditional CompStat meetings where lieutenants report out crime in their respective areas and divisions. While this was useful, Ziman believed there was a better way to go about reducing crime, she said.

“As we assessed that method, we determined that the communication was only moving in one direction — up,” Ziman said. “That meant that the real ‘subject matter experts’ (i.e. Special Operations Group, Patrol Officers, Community Oriented Policing Officers, Detectives) were not being given the opportunity to develop methods of relentless follow-up and creative enforcement action.”

Since the change, information has been flowing from all directions, helping officers hone in on prolific offenders and problems.

“The philosophy is that crime is fluid and we have to be adaptable to the trends by brainstorming solutions as they are happening,” Ziman said. “The best people to do that are those who have the knowledge of the streets so we’ve pushed the problem-solving to the officers themselves … we no longer operate in our respective ‘silos’. We have an ‘all hands on deck’ approach and we subscribe to the mantra ‘the best idea wins’.

“The POP meetings have become a think-tank where collaboration on steroids takes place. When you give officers the autonomy to apply creative and collaborative methods of problem-solving, the results are nothing short of impressive.”

Statistics show that despite a rash of robberies, for which arrests have been made, major crime in Aurora is down 8.9 percent from where it was at this time last year.

Decreases over last year’s statistics were seen in the categories of murder (down 60 percent), sexual assault (down 33.3 percent), burglaries (down 3.8 percent), and motor vehicle thefts (down 1.6 percent).

She noted that the robbery increase is largely due to a string of holdups of fast food restaurants, gas station convenience stores, and people being robbed of items they advertised for sale on social media.

Ziman said two additional suspects have been charged with one of the strong-armed robberies resulting from social media and that police believe several juveniles committed the others. Now that these offenders are off the streets, Ziman is hopeful that the robbery statistics will drop by year’s end.

“Crime is unpredictable and history tells us that there is an ebb and flow. Some of it can be thwarted but the reality is, we cannot predict the future. Our increase in robberies was a result of two separate individuals that went on a spree. Fortunately, through excellent and resourceful police work, we were able to capture both offenders,” she said. “My hope is that no serial robbers will surface as that will result in the leveling of our statistics, but hope is hard to hang my hat on.”

That said, “we continue to purse leads in all of the unsolved crimes,” she said, which include a string of arsons that have been investigated this year.

During the first six months of 2016, there were 13 reported arson cases. In the same period last year, there were six arsons for an increase of 116.7 percent.

“Most of the arsons investigated this year are related to street gang activity and are not random crimes,” Ziman said. “We are continuing to pursue leads and process recovered evidence.”

As far as aggravated assaults and batteries are concerned, both categories stayed flat at 225 reported crimes during the first six months of the year, statistics show.

And, while major crime is down nearly 9 percent, the violent crime offenses contained in the category (murder, sexual assault, robbery, aggravated assault and battery) are down by just .3 percent.

“Statistics and data are important because they provide a snapshot of where we are in comparison to where we were. But stats don’t tell the stories of community engagement that our officers have committed to as a goal,” Ziman said. “Crime can be measured but positive contacts with our citizens cannot be quantified and those are just as important. Our citizens and our police force have come together like never before and that makes Aurora a better community.”

Ziman credited her department for all of its efforts in seeing these crime stats drop, she said.

“I’m most proud of the officers from every single division who have taken ownership of this city and the commitment to make it a safer place. The chief and the command staff can implement new systems and processes but the truth is, the men and women of APD who are out there doing the work are the ones who are responsible for the reduction,” Ziman said. “It is their relentless pursuit of peace and justice that moves us forward.

— Shootings, other major crimes down in Aurora —