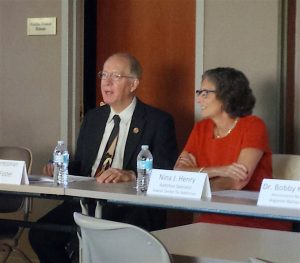 Congressman Bill Foster and additions specialist Nina Henry discuss a variety of topics pertaining to the heroin epidemic during a Sept. 26 presentation at Edward Hospital in Naperville. (Photo by Erika Wurst / for Chronicle Media)

A diverse group of scientists, doctors, counselors, concerned parents, curious citizens and a congressman gathered at Edward Hospital in Naperville last week to discuss a killer in their communities.

“We’re here today because of the heroin epidemic, and it truly is an epidemic,” Linden Oaks Medical Center’s Addiction Services Director Dr. David Lott told the group of about 60 people who showed up for the Sept. 26 discussion.

“And, it’s one that has hit us right here at home,” he said.

To raise awareness of the growing problem that’s been plaguing Chicago and the greater suburban region, Congressman Bill Foster, (D-Naperville), brought together an esteemed panel of experts to discuss many challenges related to addiction.

In presenting “Heroin in Our Community: The Science of Addiction”, Foster said he hoped to shed light on the opioid epidemic.

“For too long addiction was something that was hidden,” he said. “Thankfully, through events like these, we’ve begun to change this narrative.”

Lott began the presentation highlighting the power of opioid addiction. He discussed withdrawals, overdoses and most importantly, treatment.

“This is a chronic disease. It’s not a disease you fix, cure and it goes away,” Lott said. Addiction requires treatment and when it comes to treatment, there’s not just one approach.

What works for one person doesn’t always work for another person, Lott said.

“Even for a single person, what’s effective is going to change over time,” he stressed. “We need to keep trying. Try something else. Try different strategies.”

Foster also spoke about the importance of clinical treatment and the impact it has on tackling addiction. He said that providing treatment for addicted people is being one of the “highest return on investment opportunities our country can enter into.”

Foster was quick to point out that addiction should be viewed “less as a moral failing and more as a treatable condition.” 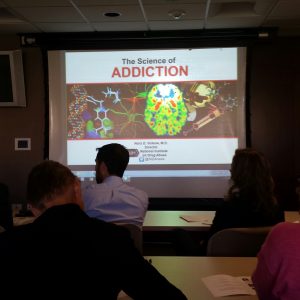 About 60 people showed up to Edward Hospital in Naperville on Sept. 26 to listen to Congressman Bill Foster and a panel of addiction experts speak about the heroin epidemic plaguing our suburban communities. (Photo by Erika Wurst / for Chronicle Media)

During her own career, panelist Dr. Nora Volkow, director of the National Institute on Drug Abuse, has been instrumental in demonstrating that drug addiction is a disease of the brain.

She spoke of the effects of medicines like Methadone, Buprenorphine and Naltrexone as being successful in decreasing the number of opioid overdoses, although less than 20 percent of people that are addicted and require treatment will receive it.

Nina Henry, addiction specialist with the Jewish Center for Addiction, knows this fact far too well, she said.

Henry has been working in the addiction field for more than 25 years and said the treatment industry is a “baby one” and that there are strides to be made. She thanked Congressmen Foster for bringing the group together for an open dialogue.

“Thank you Congressman Foster for catalyzing this conversation,” she said. “For me, this is the passion of my life … heroin overdoses are overtaking us.”

It’s discussions like this summit that can help change the face of addiction, and encourage those struggling to seek treatment, Henry said.

“We need to talk to our significant others, our friends, our colleagues,” she said. “Sometimes just telling someone you’re concerned about them can kick start an important conversation.”