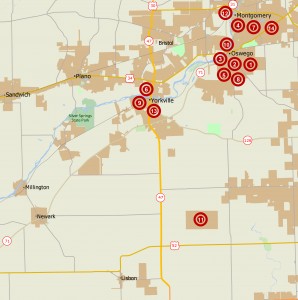 On Aug. 2, at approximately 5:59 a.m., Kendall County Sheriff’s Deputies were dispatched to a report of shots fired at a residence in the 100 block of Laurie Lane in unincorporated Oswego. Sheriff’s deputies, Oswego Police, and Montgomery Police responded to the scene. Upon arrival at the scene, deputies received information that a vehicle had stopped on Laurie Lane in front of the victim’s residence. It is alleged that a suspect, who is known to the victim/homeowner, had discharged a firearm from the area of the vehicle at the residence.

There were no injuries reported with this incident. The offender had fled the area prior to police arriving on scene. The victim was home at the time of the shooting. Deputies located numerous bullet holes in the residence and with assistance from the Aurora Police located the suspect and vehicle in Aurora. During the investigation, it was determined that the victim was involved in a physical altercation with the suspect at an Aurora bar earlier in the evening. The victim and suspect knew each other from having previous contact.

Kendall County detectives are conducting an investigation into this matter. The Aurora Police Department and Kendall County Criminal Intelligence Team are assisting. At this time, the shooting is not believed to be a random act of violence. It was focused on a specific person and location. There is no known threat to the public.

Anyone who has information about this crime is urged to contact the Kendall County Sheriff’s Office at 630-553-5856 or email detectives@co.kendall.il.us. Person can also call Kendall County Crime Stoppers at (630) 553-5999. Callers remain anonymous and are eligible for a reward of up to $1,000.00 for information leading to the arrest of the offenders.