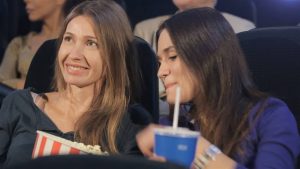 The Oswego Cultural Arts Commission will host the LUNAFEST, a traveling film festival of short films written, directed and about women, and championing women in the film industry.

Aurora police are continuing to investigate the robbery of the Jared’s Jewelry, 1000 block of N. Rt. 59, that occurred on Dec. 21.

Around 7:40 p.m., three men, all of whom had their faces concealed, entered the store. One of the men acted as a lookout while the other two announced the robbery and proceeded to smash two glass display cases.

The pair then grabbed jewelry items from the cases and fled westbound on foot. There were no injuries. The total dollar loss exceeded $340,000.

The suspects were all described as black men wearing dark clothing. One of the men who broke into the display cases was further described as around 6’2”, 240 pounds.

The other was said to be around 5’10” and thin. There was no further description of the man who acted as a lookout.

If you have any information, call Investigations at 630-256-5500 or Aurora Area Crime Stoppers at 630-892-1000. You can now talk to someone at Crime Stoppers around the clock and if your anonymous tip leads to an arrest, you qualify for a cash reward.

Shortly before midnight Jan. 1, several Aurora Police Department Special Operations Investigators set up in an area of the city where they expected New Year’s Eve revelers to be shooting guns into the air.

Around midnight, two of the Investigators heard multiple shots being fired around Superior and Ohio streets and were able to narrow down the shots to a home in the 1000 block of Superior Street. They responded to that home in an unmarked vehicle, walked to the backyard and saw Benny Ochoa, 33, of the 300 block of Stuart Avenue, Aurora, among a group of people and allegedly holding a revolver.

When the Investigators announced their presence, and ordered everyone to show their hands, the five complied. When they searched Ochoa, police located two more .40 caliber semi-automatic pistols in his waistband that had already been emptied; as well as a small bag of cocaine in one of his pockets.

The other five people were unarmed. Reports indicate Ochoa fired more than 40 rounds before being caught.

The Investigators secured two felonies through the Kane County State’s Attorney on Ochoa— reckless discharge of a firearm and unlawful possession of a controlled substance.

State Rep. Stephanie Kifowit, D-Aurora, took the oath of office for a new legislative session last week. During the next two years, Kifowit said she looks to lead in a bipartisan manner to strengthen Veteran services, protect access to health care and boost education funding.

“This new term is an opportunity to help the state and its people repair the damaged caused by the Rauner Administration’s record-breaking budget impasse,” said Kifowit. “Many tough decisions lie ahead of us. But those decisions should be made together, with Republicans and Democrats at the table, rather than in a partisan manner.”

While access to health care becomes more limited and protection against higher costs erodes, Kifowit looks to double down on protecting access to those with pre-existing conditions and stopping unfair premium and prescription drug cost spiking.

“Springfield needs to continue to properly fund our schools, and the new funding is a good first step; however, it is also important to provide concrete property tax relief for families,” Kifowit continued. “Our community is entitled to fair school funding that educates every child so they can be successful adults.”

Kifowit believes in staying accessible to residents in the community because it is important to her to listen to residents’ concerns, answer questions, inform residents on current legislation and provide services and seminars at no cost.

She will continue to host her Monday Morning Coffee with Kifowit.  In addition, she has scheduled two events for January.  Her monthly Third Thursday is an opportunity on how to use the Illinois General Assembly’s official website and a briefing on new laws that took effect on Jan. 1s is scheduled for Thursday, Jan. 17 at 6 p.m. at the Aurora Library Eola Road Branch, located at 555 S. Eola Road. in Aurora.

An education funding seminar is scheduled for Wednesday, January 23 at 6:30 p.m. at the Wheatlands Elementary School, located at 2290 Barrington Drive W in Aurora.

Join the Oswego Cultural Arts Commission on Feb. 9 for LUNAFEST, a traveling film festival of short films written, directed and about women, and championing women in the film industry. With a handcrafted makers market, light refreshments, live music and lively discussion tables at intermission, LUNAFEST is a perfect opportunity for an afternoon with your favorite gal pals. Event takes place at Oswego Village Hall.

On Monday, Jan.  7, at approximately 3 a.m., Oswego Police responded to a gas station in the 6500 block of Route 34 for a suspicious circumstance call. It is alleged that John Arrichiello, 31, 100 block of Eisenhower Lane, had been conversing with an employee inside a gas station store for approximately 90 minutes.

He then exited the store and when the employee, a 28-year-old male stepped out of the store, Arrichiello approached him and punched him repeatedly until the employee got away and locked himself inside the store.

Responding officers found the two men still at the gas station. The employee was taken to a local hospital for non-life threatening facial injuries. No information is available on his current condition.

The investigation is still ongoing and anyone who may have information is requested to call the Oswego Police Department at 630-551-7300 or Kendall County Crime Stoppers at 630-553-5999 to leave an anonymous tip.

An Oswego man was charged with violations of the Animal Control Act and Humane Care of Animals Act in regard to an incident involving a dog bite that occurred in November 2018.

On Thursday, Nov. 22, at approximately 6:50 a.m., Oswego Police were dispatched to the residence of Shaun Manning, 46, in the 100 block of Fox Chase Drive South for a report of a dog bite that had occurred the previous day, Wednesday, Nov. 21, 2018, at approximately 7 p.m.

It was reported to police that a family member and a 4-year old child the family member was caring for had entered the residence and the family dog, a black colored pit bull terrier, attacked and bit the child.

Police have not received any reports of a loose dog matching the dog’s description.

On Dec. 28, 2018, the Kendall County State’s Attorney’s Office filed three misdemeanor charges against Manning: abandoning an animal where it may become a public charge or may suffer injury, hunger or exposure, by releasing it to run free after it had bitten a person; failure to quarantine an animal after it had bitten a person; and failure to provide proof of inoculation. 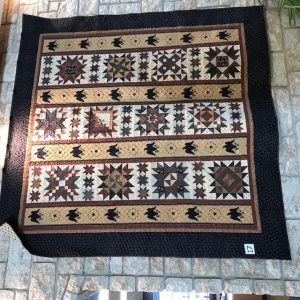 The Friends of the Yorkville Public Library invite everyone to their sixth annual Mini Golf FUN Raiser to be held at the Library on Sunday, Jan. 27.

Raffle baskets are now on display at the Library, and one of the prizes is this handmade quilt. Prizes include the American Girl Doll of 2019, family tickets for Raging Waves Waterpark, a round of golf at Whitetail Ridge Golf Course and many other gifts donated by the community. Raffle tickets are available for purchase at the Library now and on the day of the event for $1 each or 6 tickets for $5.

All proceeds go directly to the Yorkville Library to support and promote Library services and programs. The cost to play is $5 a person, cash or check; tickets are available for purchase now and on the day of the event. Children age 10 and under must have adult supervision.

The Friends of the Yorkville Library is a volunteer group of individuals committed to supporting and promoting the Library. The Friends meet the second Monday of each month at 10:15 a.m. in the Library’s Pfister Meeting Room.

The United City of Yorkville and the Village of Oswego have partnered together in 2019 to host a third annual TopGolf outing.

This growing attraction in Naperville features a range-style multi-level golf experience. You and your business are invited to take part in this fun event on Thursday, March 7, from 2 to 5 p.m. at TopGolf Naperville, 3211 Odyssey Court, for an afternoon filled with food, fun and a little bit of competition.

Can’t make the event? Your business can still support the City of Yorkville and the Village of Oswego by sponsoring! For information on participating or sponsoring the TopGolf Outing contact the Yorkville Parks and Rec Department at 630-553-4357 or email sremus@yorkville.il.us. Registration deadline: Feb. 28