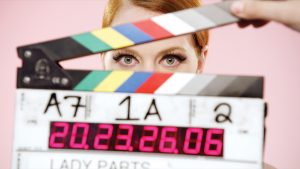 Oswego will once again participate in the LUNAFEST film project featuring works by women filmmakers. (Photo courtesy of LUNAFEST)

These days more than ever, women are seeking ways to empower each other, build community and affect change. On Friday Feb. 7, they are invited to do all three.

LUNAFEST, a fundraising film festival of shorts by and about women, will again be held in Oswego, with proceeds benefitting Mutual Ground.

“Women have stories that need to be told,” said Nikki Balcerak, LUNAFEST program and partnership manager. “(They) are still painfully underrepresented in film. Just look at the nominations for the Golden Globes.”

This festival gives women, who might not otherwise have the chance, a platform to tell and share their stories to audiences across the nation.

In its 20th year, LUNAFEST has hosted more than 2,000 screenings and opened doors for more than 160 women filmmakers. In addition, the festival has raised more than $5.2 million for women’s organizations.

“It’s clear by the success of our 20-year-old festival and the box office at large — think “Wonder Woman” and “The Farewell” — that women’s stories are resonating with audiences around the world,” Balcerak said.

Hoping to spark thought, curiosity and conversation, the films incorporate a variety of genres, including animation, foreign and drama, but Balcerak said the most well perceived film shorts are the ones that approach tough topics on gender issues in a comedic way.

“We work to build balance and cadence with in the program,” she said. “We look for topical women’s issues from a variety of perspectives.”

This year’s lineup features films from directors who have been screened at Cannes, SXSW, and Palm Spring ShortFest.
LUNAFEST also provides host venues with discussion questions that can be used to lead conversation following the screening, and encourages all women to find their voice and their creative side.

Oswego’s festival, hosted by the Oswego Cultural Arts Commission, will be held on Feb. 7. Tickets can be purchased ahead of time at www.gooswego.com for $23.91, or purchased at the door for $28 if still available.

In addition to the films, this year’s event will also include a celebration of the arts with live artist demonstrations. Participate in a raffle, film discussion, and have the opportunity to make and take your own film-inspired artistic creation.

It is recommended that festival-goers be ages 14 and up.