Hundreds of protesters turned out in downtown Plainfield for the Family March: Black Lives Matter on June 18.

The Thursday evening rally started at Plainfield Central High School by the football field, turning into a march on James Street to Lockport Street over the DuPage River and then into Settlers’ Park. 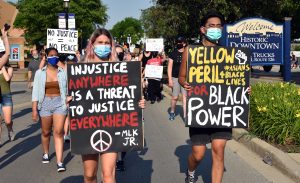 Marching for justice was the message of those in attendance at the Family March: Black Lives Matter on June 18. (Photo by Karie Angell Luc/for Chronicle Media)

The clear weather was 88 degrees on a sunset evening.

Families filled the staggered lawn seating of the Richard A. Rock Amphitheater. They chanted during the march saying names of victims of alleged police brutality and more.

Participants had the choice of taking a knee for 46 seconds in honor of the time it took (8:46) for George Floyd to die last month due to asphyxiation by compression to his neck by a police officer’s knee.

“I seriously thought only a handful of families would join me,” said organizer Miravone Dorough of Plainfield, organizer.

“I’m so touched that the community has really come together.”

The parking lot by Plainfield Central High School began filling with vehicles and families by 5 p.m. The march was set to begin at 5:30 p.m. 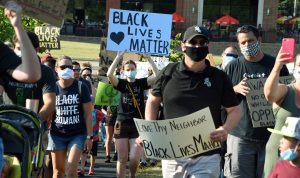 Hundreds came out for a family march for Black Lives Matter in Plainfield on June 18. (Photo by Karie Angell Luc/for Chronicle Media)

Dorough stood on the back of a flatbed truck and addressed the audience, telling families she witnessed, “peace and love.”

“We’re all part of one big family, we don’t always agree on everything, but we talk it out, we figure it out and we go forward, together, forward,” Abrell said.

Dorough, describing herself as a functional medicine doctor who has her own medical practice in Naperville, said she was motivated to start the rally event by her children.

Her family immigrated to the United States when she was 2 and settled in California before moving to Rockford. Dorough is a 2004 graduate of Jefferson High School in Rockford.

She homeschools her children and is expecting her third child. 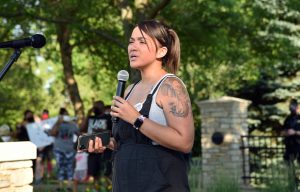 When her nearly 8-year-old daughter was 4, “she was furiously coloring a picture of a princess and crying,” Dorough said.

“When I asked her what was wrong, she told me, ‘Mama, I can’t find the right color to match her skin to mine.’

“My heart broke and I knew that our journey started on that day,” Dorough said.

“My children are my inspiration for most of my life decisions and personal growth,” she said.

“If we want to prepare our children to step out into the world without us one day, I want mine to be the catalyst for peace, change and truth.” 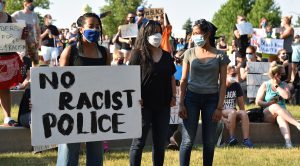