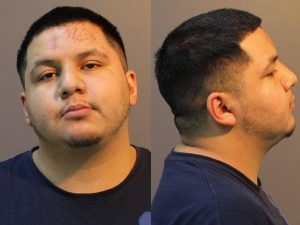 David R. Acevedo, 26, of Plano, was found guilty of first degree murder for the stabbing death of Andrew “A.J.” Erickson back on Sept. 11, 2015, according to the office of Kendall County State’s Attorney Eric Weis.

Judge Robert Pilmer, who presided over the two-day bench trial, found Acevedo guilty of four of the five counts of first degree murder. Additionally, Judge Pilmer found that self-defense did not apply to the facts of this case.

Charges had been filed against Acevedo in September 2015 after an altercation involving Acevedo and Erickson, along with several other individuals, began over a missing cell phone and cigarettes in the early morning hours of Sept 11.

During the altercation on Cummings Street in Plano, Acevedo pulled out a knife and repeatedly stabbed Erickson to death, according to the state’s attorney’s office. Acevedo fled the scene and was located hours later at his house in Plano close to the murder scene.

Witnesses during the two-day bench trial testified how Acevedo turned the physical altercation with Erickson into a murder when Acevedo pulled out a knife and stabbed Erickson.

When officers and first responders arrived, they found Erickson dead on the scene, and Acevedo, along with the murder weapon, nowhere to be found. Officers, with the help of witnesses who say they saw the events, attempted to locate Acevedo and later found him sleeping in his bedroom near some bloody clothing.

Acevedo was taken into custody where he remained until the trial.

Acevedo’s bail was immediately revoked and he will be sentenced on Feb. 11, 2019 at 1 p.m. Acevedo faces a sentencing range of 20-60 years in prison.