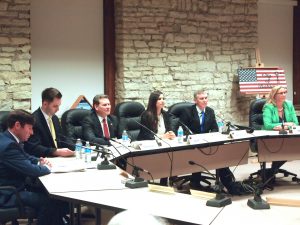 Seven Republicans say they are the best choice for flipping the 14th Congressional District back to Republican control.

The seventh candidate, Jim Oberweis, could have been put on a milk carton as he was missing from the event. A League spokesman said Oberweis informed them he was too busy to attend.

A few of the candidates took shots at the state senator from Sugar Grove who bypassed the event.

“There are a lot of good candidates except the one who did not show,” Evans said.

Rezin, who serves with Oberweis in the state Senate, said although in the super-minority, she has been able to get legislation passed by working with Democratic colleagues. In contrast, she said, Oberweis has gotten only one piece of legislation passed in seven years in the Senate.

The Aurora Area, Central Kane County and Naperville chapters of the LWV, along with the Batavia Chamber of Commerce, sponsored the forum at Batavia City Hall. 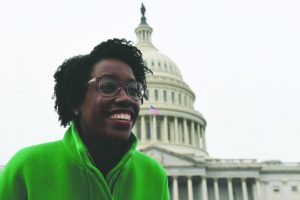 Catella: An Army veteran, Catella said he is running because America is bankrupt on honesty these days.

The St. Charles resident said incumbent Lauren Underwood and her fellow Democrats are trying to send the country down the wrong path.

Evans: A small-business owner, Evans said he is a political outsider looking to make a difference.

“I have no angle,” the Warrenville resident said. “I have a passion for serving the district.”

Evans promised to always be transparent, letting constituents know where he stands on issues and why he took a certain position.

Gradel: A walk-on kicker at the University of Notre Dame, Gradel said his 30-year career as a trader has made him prime to take on the challenges facing Congress and America today.

“I kicked field goals in college. I am ready to kick some tail in Congress,” the Naperville resident said.

Lauf: Born and raised in the 14th District, Lauf said she wants to restore confidence in political leaders.

“I see the American dream under attack from the far left,” the Woodstock resident said.

The former Trump appointee to the Department of Commerce said a new energy is needed in Congress.

Marter: A self-proclaimed lover of “America, freedom and the Constitution,” Marter said he would join the Freedom Caucus and back President Donald Trump’s agenda.

Rezin: Having served in the state House and Senate for 10 years, Rezin said she has the proven leadership to be a representative in Congress.

Lauf: She said the Affordable Care Act needs to be reworked. “I have a huge problem with how Obamacare was crafted,” Lauf said.

Marter: The candidate said he wants to restore the free market for health care companies. He said Obamacare is “a disaster that needs to be repealed.”

Rezin: She said Americans need relief from health care costs. “The middle class is not going to prosper until we fix the problem,” Rezin said.

Evans: The candidate said he wants to make sure people can get the treatment they need for health issues. “I will protect pre-existing conditions,” Evans said.