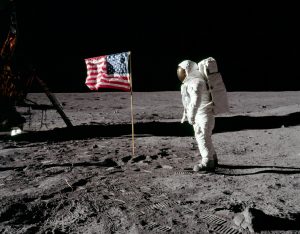 Waubonsee Community College in Sugar Grove and College of DuPage in Glen Ellyn are inviting the public to attend programs marking the 50th anniversary of the Apollo 11 moon landing. (NASA photo)

Fifty years ago, on July 20, 1969, the United States made history by landing the first two humans on the Moon.

Six hours after they surfaced, Armstrong took his first steps on the moon. Aldrin later joined him, and the men spent two hours and fifteen minutes exploring and gathering lunar material to take back to Earth.

On July 18, 2019, almost exactly fifty years later, families from across the Fox Valley will gather to celebrate the “giant leap for mankind” at Waubonsee Community College’s Sugar Grove Campus’ Moon Mania event. From 6:30-9:30 p.m., a host of activities will take place for families with kids of all ages.

During the free event, participants will be able to view real NASA artifacts and view the night sky from a professional telescope. There will be inflatable “moon jumps” and “out-of-this-world” snacks. Kids can try Astronaut ice cream sandwiches and munch on Pop Rocks candy as they learn about the moon landing in a fun environment.

Crafts will include moon rock hunts and well as an opportunity to make a space shuttle glider. There will be constellation tracing cards, coloring sheets and Solar System stickers.

Don’t forget to grab your tickets for some other-worldly raffle prizes. Popular toys like Moon Shoes, an Apollo Saturn V Lego Set, and a Rocket Ship play tent with projector flashlight will each be raffled off. An Astronaut and Space Science Barbie Play Set, as well as Women of NASA Lego Set will also find new homes with lucky ticket holders that evening.

Make sure you bring a blanket or chair and plenty of bug spray. In the event of inclement weather or rain, activities will move indoors. 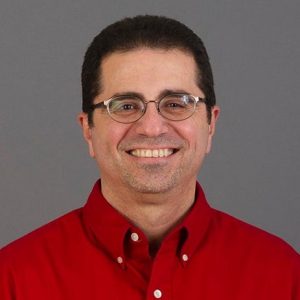 This event is free and open to the public.

From 5:30 to 7:30 p.m., attendees will have the opportunity to explore interactive booths covering a range of Apollo program-related topics, including virtual reality exhibits from the COD Astronomy Club and the Glen Ellyn Library, model rockets from the Northern Illinois Rocketry Society, a real moon rock, a lunar activity table from SciTech Museum, stomp rockets and space demos from American Science and Surplus, and telescopic sky viewing with the Naperville Astronomy Association.

In addition, David Chudwin M.D., author of “I was a Teenage Space Reporter: From Apollo 11 to Our Future in Space,” will be on hand to meet attendees and sign copies of his book.

Beginning with the Mercury Program, the first spaceflight program in the U.S., DalSanto will discuss the history of the space program leading up to the historic moon walk, including the Gemini Program and the early Apollo missions. In addition, he will discuss the vehicles developed to enable the flight and moon landing, the missions that followed Apollo 11 and the new directive to return to the moon in 2024.

Following a 15-year career in IT, DalSanto followed his passion for the stars which led to presentations for astronomy clubs and an invitation to perform public outreach and oversee the observatory at Waubonsee Community College. Subsequently, an increasing interest in teaching inspired DalSanto to earn a master’s degree in astronomy. He has been a full-time faculty at COD since 2012.

While this talk is free as part of the College’s Sage Series, pre-registration is required. To register, call Continuing Education at 630-942-2208.