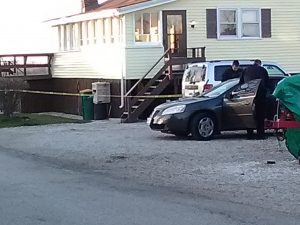 A Mundelein police officer looks at the scene, after the residence was taped for investigators. (Photo by Gregory Harutunian/for Chronicle Media)

Residents of Fox Lake and Antioch were shocked at the news last week that Ray Bellucci, a much-loved figure on the Eagle Point Road peninsula community, had died of a gunshot wound.

The Lake County Major Crimes Task Force, through its spokesperson, Det. Chris Covelli, issued a press release quickly on April 29: “At approximately 2:30 p.m., Fox Lake Police officers were dispatched to a residence in the 100-block of Eagle Point Road, Fox Lake, for a report of a gunshot victim. Fox Lake officers arrived and found the 72-year-old homeowner had sustained an injury from a gunshot wound.

“The man was transported to Centegra Northern Illinois Medical Center in McHenry where he was pronounced dead. Fox Lake police requested the assistance of LCMCTF. Fox Lake detectives and task force investigators remained on-scene.” Investigators did not release the scene until the next day, and no further information was given.

“He was a good neighbor and would help anyone,” said Charlie Stein, who lives nearby. “If you were in trouble, he was the first one there to help you out.”

The statement from the coroner’s office, read: “McHenry County coroner, Dr. Anne Majewski, announced this afternoon that her office is investigating the death of a Fox Lake man who died Apr. 29, at Centegra McHenry Medical Center. The deceased is identified to be Raymond F. Bellucci, age 72. After a 911 call at 2:33 p.m., Fox Lake Police, and Fox Lake Fire and Rescue, responded to the scene and Mr. Bellucci was subsequently pronounced dead.

“The death remains under investigation by the LCMCTF, Fox Lake Police, and the McHenry County Coroner’s Office.” 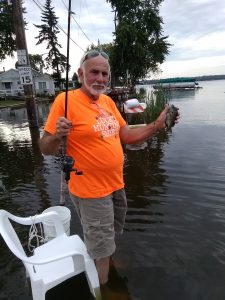 Majewski also added, “No further information is available at this time, as the death remains under investigation by all agencies.”

The person who made the 911 call, and allegedly discovered the body, was questioned at the Fox Lake Police Department, before being released.

“We have the 911 tape, and we are waiting for gunshot residue tests on the skin, the clothes, and the toxicology tests to be returned,” said Fox Lake Police Chief Jimmy Lee. “We know who all the players are, and we’re following all the leads, so if the investigation goes in a particular direction, we will pursue it. A determination will be made once all the evidence and information is in. This is a real tragedy.”

Bellucci’s wife, Jude, was with family, and declined to comment.

In the 1980s, Bellucci raced in motor-cross events and set several records, which still stand. He often modified his own engines using his background as a tool-and-die maker, and the National Hot Rod Association honored Bellucci with its “Pro Mechanic of the Year” award, a nationwide recognition.

After moving to Fox Lake, his pursuits turned to wakeboarding with his “grandkids” and neighbors, and fishing. Shotgun skeet-shooting also became a passion, learning and collecting everything about the firearms involved with the sport, in addition to making the shells himself.

“We were friends and neighbors with Ray for over 20 years and will always remember him as a kind, generous man, who loved family and friends,” said neighbor, Linda (Kozisek) Pastorello. “He was always quick to help anybody who needed it.

“My favorite memory of him is when we were coming down the street in our rowboat, devastated and crying because of another damaging flood on Eagle Point, from the Pistakee Lake back-up, and we were able to smile because there was Ray … finding the positive in all of it, standing in the water on the road with a fishing pole, waving ‘hello’ to us,” she said. “It was a ‘Ray’ of sunshine on a cloudy day.

“He will be missed so much, as we lost a brother, a friend, a husband to Jude, and a wonderful neighbor in our community.”