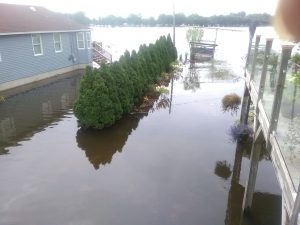 The Federal Emergency Management Agency has formally denied the state’s request for recovery assistance from the record mid-July rainfalls and resultant flooding to impacted residents and business owners in Cook, Lake, McHenry, and Kane counties. An $18.3 million threshold for damages incurred by public entities in the four-county area was not met, along with the assessments for grants on individual loss.

Brock Long, the agency’s director, stated In a Nov. 7 letter to Gov. Bruce Rauner, “It has been determined that the damage from this event was not of such severity and magnitude as to be beyond the scope and capabilities of the state, local affected governments, and voluntary agencies.”

On Nov. 15, the Lake County Emergency Management Agency issued a press release: “Our records show that you reported damage to your property during the July 2017 flood. We used your input to complete a comprehensive damage assessment. Homeowners, and business owners, impacted by the July 2017 flooding in Lake County may be eligible for loan assistance from the U.S. Small Business Administration (SBA). The SBA is opening a Disaster Loan Outreach Center at the Lake County Emergency Operations Center (EOC), 1303 Milwaukee Ave. in Libertyville, beginning Nov. 16.

“SBA Customer Service Representatives will be on-hand to issue loan applications, answer questions and help individuals complete their applications. The deadline to file an application is now to Jan. 12, 2018. Under the SBA assistance program, those in Lake County and the contiguous counties of Cook and McHenry; and Kenosha in Wisconsin can apply for low-interest disaster loans.”

An SBA damage assessment conducted in August determined that Lake County had 21 businesses and 233 houses that incurred major damage and uninsured losses. The 2017 flood affected the Chain ’O Lakes, Des Plaines River, and Fox River systems with rainfall and damage that exceeded amounts in the 2013 flood, dubbed the “100-year flood.” An example of the increase was Fox Lake with crests of 7.91 inches above flood stage in 2013, and 8.03 above flood stage this year.

The Illinois Emergency Management Agency had said that an $18.3 million figure is only for assistance to local governmental bodies for public entity response costs such as debris removal, rescue operations, road closures, damage to public properties, and manning detour routes. It also includes equipment damage and deductible amounts on insurance premiums. The figure was based on a per-capita impact indicator for 12.8 million people statewide, multiplied by $1.43. The amount needed to be met on a statewide basis by the four counties in 2017.

“Naturally, we’re disappointed that we didn’t receive reimbursement from FEMA … there were about $300,000 in expenses that weren’t covered by insurance,” said Fox Lake Village Administrator Anne Marrin. “There was overtime from police, emergency crews, and public works … equipment damage. We had 40 days of funding in reserve, and part of that amount was applied. Right after us, there was Florida, Texas, and Puerto Rico with flooding, that was deemed more severe.”

“And we’re still working diligently with homeowners in recovery, even as of this date, by waiving the fees for building and demolition permits,” she said.

“The state of Illinois has a program similar to FEMA, but it’s been exhausted at the state level,” said Patti Thompson, IEMA’s communications director. “Gov. Rauner was actively pursuing the SBA loans, as of Nov. 9. The FEMA grants were a maximum of $33,000. Those cash outlays are normally $5,000-$6,000. Many homes may not be able to fully recover, even with the full $33,000.

“We submitted the request because FEMA help was needed. We would have liked the assistance, but the SBA can provide short-term loans that comes with the federal declaration. At last word, we were waiting for all that to be determined.”

While residents of both Lake and McHenry counties suffered from flooding on the Chain ’O Lakes-Fox River systems, the Gurnee area in Lake County was inundated by the Des Plaines River. Damage estimates were tabbed at 400 homes damaged, with 50 in the floodplain of the rivershed.

“The initial assumptions that were put out last August, from the county, were that we would be denied,” said Jack Linehan, Gurnee’s public information officer. “We kept residents aware of the programs that were out there locally. There were two parts to this, one being the public assistance … like $200,000 in police overtime and that’s an unplanned budget expense. Then, there’s the individual assessments, which were up in the air.

“We basically had two sets of flooding, the localized one in the basements of homes, and the river flooding. The public damage is insured, but the private is a lot harder,” he said. “We went home to home with the properties in the flood plain. It was difficult.”

Due to the disaster declaration, small businesses and non-profit agencies seeking cash loans to help cover their immediate expenses resulting from flood-related expenditures have an Aug. 13 deadline.