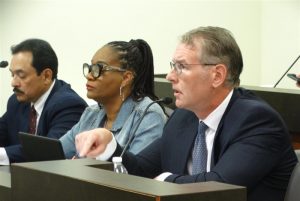 : Republican Sen. John Curran questions officials from the Illinois State Police about its handling of a “clear and present danger” report on the alleged shooter in the July 4 Highland Park mass shooting. (Capitol News Illinois photo by Peter Hancock)

SPRINGFIELD – Officials from the Illinois State Police faced questioning Wednesday from Republican lawmakers who said the agency had authority to reject a gun permit application from a man who later allegedly carried out a mass shooting at a July 4 parade in Highland Park.

The alleged gunman, Robert Crimo III, is being held without bond on a 117-count indictment for the mass shooting that left seven dead and dozens more injured.

State Sen. John Curran, R-Downers Grove, criticized ISP for claiming that it had no authority to deny Crimo a Firearms Owners Identification, or FOID card, when he applied for one in December 2019, just three months after he had been the subject of a “clear and present danger” report filed by an individual who alleged Crimo had threatened to “kill everyone.”

“This report clearly, by any independent review, would meet the level of preponderance of the evidence,” Curran said. “It is clearly above the 50 percent threshold, more likely than not, that there (was) a threat of violence in that home.”

The questioning came during a meeting of the Joint Committee on Administrative Rules, a legislative panel that has oversight of the administrative rulemaking process.

On Sept. 5, 2019, Highland Park police received a report, believed to be from a juvenile member of the Crimo family, that Crimo had made a threat in the household a few days earlier and that he intended to “kill everyone.” The reporting individual told authorities of being afraid to go home due to the nature of the threat.

When police arrived at the residence, according to the report, they interviewed both Crimo and his mother, Denise M. Pesina. Crimo reportedly admitted to being depressed when he made the statement and admitted having a history of drug use. The reporting officer noted that neither Crimo nor his mother was forthcoming about the language he used when making the threat.

Police then recovered a tin lunch box containing 16 miscellaneous knives along with a 12-inch dagger and a 24-inch Samurai-type blade. The weapons reportedly belonged to Crimo’s father, who did not live in the residence, but were being stored in Crimo’s bedroom closet.

During the interview, Crimo denied that he felt like hurting himself or others. 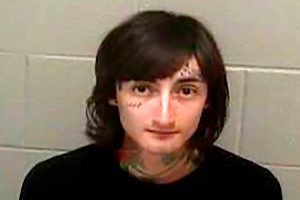 ISP said in a statement after the July 4 shooting that no arrest was made following the September 2019 incident and that no one, including Crimo’s family, was willing to move forward with a complaint or provide further information on threats or mental health issues that would have allowed law enforcement to take additional action.

Highland Park police then forwarded a copy of the report to ISP, which is responsible for administering the state’s FOID law. But because Crimo did not have a FOID card at the time and had not yet applied to obtain one, ISP discarded the report.

The rule also defined a “clear and present danger” as someone who poses “an actual, impending, or imminent threat of substantial bodily harm to themselves or another person that is articulable and significant” or a person “who will be likely to act in a manner dangerous to public safety or contrary to the public interest if they were granted access to a weapon.”

Curran, however, questioned whether any determination had been made in Crimo’s case, pointing to what he interpreted to be inconsistencies in ISP’s public statements.

He noted that on July 5, the day after the shooting, ISP issued a news release stating that the agency took no action on the report because Crimo did not have a FOID card to revoke or a pending application to deny.

But the following day, Curran noted, ISP issued another release indicating the agency had, in fact, reviewed the Highland Park police report which indicated that officers found no probable cause to arrest Crimo.

“Upon review of the report at that time, the reviewing officer concluded there was insufficient information for a clear-and-present-danger determination,” the release stated.

Curran said the conflicting statements have led to confusion.

“We don’t know if the determination was ever made because you’re not telling us,” Curran said. “You put two different versions out there. I’d like to know which one (is accurate).”

Other Republicans on the panel criticized the Pritzker administration over its handling of the incident.

“The Pritzker administration’s purported review of the FOID card process following the Aurora shooting in 2019 failed to recognize this gap in the interpretation and application of clear-and-present-danger reports submitted to the ISP,” Sen. Donald DeWitte, R-St. Charles, said in a statement. “Had the Pritzker administration done what they said they were going to do, which was to review and make sure laws already on the books were being implemented more effectively, the tragedy in Highland Park might never have occurred.”

But Kelly Griffith, ISP’s acting chief legal counsel, defended the agency’s actions, saying its hands were tied by the rules in place at the time.

“At the time that the clear present danger came to the Illinois State Police in September 2019, the rule would not have allowed us to keep that information,” she said. “The person didn’t have a FOID card. They didn’t have an application on file. And so that report was actually not kept.”

On July 21, ISP published a new emergency rule to make it clear that the agency will maintain records of clear-and-present-danger reports, even if the person does not have a FOID card or pending application.

It also broadens the definition of a clear and present danger to match the definition in statute, which does not require that the person pose an “ impending, or imminent threat” or that the threat be “articulable and significant.”

State agencies are allowed to issue emergency rules under some circumstances, but they are still subject to JCAR review and can stay in effect for only 150 days before they either expire or are replaced with permanent rules. ISP has indicated it intends to submit permanent rules, which will also be subject to public comment and further review by JCAR.

JCAR did not issue an objection to the emergency rule Wednesday, meaning it is allowed to remain in place through the 150-day window.