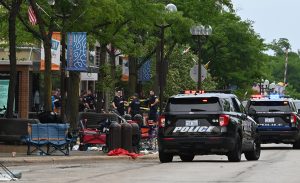 One week after the Lake County Board approved a resolution calling on state and federal lawmakers to ban the sale and possession of assault-style firearms, the Highland Park City Council unanimously voted in favor of a similar motion, during its Monday, Aug. 15 session.

Both actions are symbolic and nonbinding, while coming on the heels of the July 4 Highland Park Independence Day shootings.

The Lake County Board affirmed the resolution with a 16-5 vote, largely along Democratic-led party lines, and after several hours of debate. The Aug. 9 meeting agenda was altered to insert the measure for discussion. The resolution seeks a state ban on assault-style weapons, large capacity ammunition magazines, and stricter Firearm Owner’s Identification card (FOID) review.

The board’s action also supports House Bill 0552, the Safe Gun Storage Act, which provides that “a firearm owner shall not store or keep the firearm in any premises unless the firearm is secured in a locked container … so, as to render the firearm inaccessible.” It has languished in the House Rules Committee docket since March 27, 2021.

“This legislation will not make us any safer,” said District 3 board member, Richard Barr.

Highland Park Mayor Nancy Rotering spoke at the board’s Committee of the Whole meeting, several days earlier. “I know that restricting access to assault weapons does not stop all gun violence, but banning weapons of war is one commonsense step we can take. It is worth it, even if just one life is saved.”

Robert Crimo III is the alleged shooter in a mass killing, which took place in downtown Highland Park on July 4, as crowds had gathered on Central Avenue for a parade. Seven people were killed in the rampage, along with 48 injured.

Crimo III used a semiautomatic assault weapon and emptied nearly three 30-round ammunition magazine clips, from a rooftop onto the spectators. He has been indicted on 21 counts of first-degree murder, among a total of 117 felony charges. His next court appearance is Nov. 1.

The city council resolution mirrors the county board action. Rotering addressed the city council, prior to the vote, and said, “There is no timeline for how long grief lasts, nor a guideline for how one should feel after a traumatic experience … working together, we will pursue legislative initiatives with other governing bodies because we know that a single city, county, or state cannot protect its residents from this kind of violence.”

Highland Park enacted an assault-weapons ban in 2013. Neighboring municipalities Deerfield and Northbrook have since enacted similar legislations for their jurisdictions.