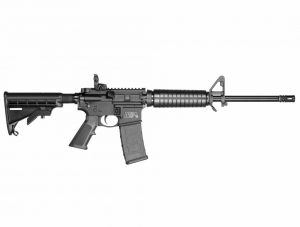 An image from the Smith & Wesson website shows the type of weapon used in the July 4 Highland Park shooting. (Credit: www.smith-wesson.com)

SPRINGFIELD – A gun rights group is challenging the city of Highland Park’s ban on assault weapons and high-capacity magazines like the ones used in a mass shooting there on July 4.

The National Association for Gun Rights, based in Loveland, Colorado, filed the lawsuit Wednesday, Sept. 7 in federal district court in Chicago at the same time it filed lawsuits challenging a similar ordinance in Naperville as well as state laws in Massachusetts, Connecticut and Hawaii.

The cases were filed in district courts that are part of five different federal appellate circuits. Illinois is part of the 7th Circuit. In a statement Thursday, Sept. 8, the group said it is pushing for a national precedent to end all similar bans across the country.

“Our mission has always been to expand pro-gun precedents and defend gun owners,” Hannah Hill, research and policy director for the National Foundation for Gun Rights, the association’s legal defense fund, said in the statement. “The brilliant decision from (U.S. Supreme Court) Justice (Clarence) Thomas this summer has provided us with the ammo to free millions of law-abiding Americans who are being unjustly denied their gun rights.”

In the lawsuits, the gun rights group rejects the use of the term “assault weapon,” calling it a “charged political term meant to stir the emotions of the public” and instead uses the term “banned firearm.”

The lawsuits allege that the bans violate the Second Amendment of the U.S. Constitution. They cite recent U.S. Supreme Court decisions, including a 2008 decision overturning Washington D.C.’s ban on handguns, a 2010 decision overturning similar handgun bans in Chicago and Oak Park, and a decision from June of this year overturning the state of New York’s law requiring people to show “proper cause” for obtaining a firearm license.

On July 4, Robert Crimo III, 21, allegedly took an assault-style weapon and three large-capacity magazines onto a rooftop in downtown Highland Park and fired into an Independence Day parade, killing seven people and wounding dozens of others. He is being held without bond on multiple counts of first-degree murder.

Prior to that shooting, Highland Park had an ordinance dating back to 2013 banning the sale or rental of assault weapons or “assault ammunition feeding devices,” definitions of which are spelled out in the law. The city of Naperville adopted a substantially similar ordinance in August, specifically in response to the mass shooting in Highland Park and an earlier shooting at an elementary school in Uvalde, Texas.

Highland Park’s ordinance, however, was previously challenged in federal court, and in 2015 a three-judge panel of the 7th Circuit Court of Appeals unanimously upheld the ordinance.

In their opinion, the judges specifically cited the 2010 Supreme Court case from Washington, D.C., in which Justice Antonin Scalia, writing for the majority, said the Second Amendment does not guarantee a right “to keep and carry any weapon whatsoever in any manner whatsoever and for whatever purpose,” and noted that the court cautioned against interpreting the decision too broadly.

“We remain confident that the assault weapon ban that the city of Highland Park adopted in 2013 is lawful and constitutional, and that the affirmation of constitutionality by the Seventh Circuit Court of Appeals remains controlling precedent in our jurisdiction,” the city’s attorney, Steven M. Elrod, said in an email statement.

A spokesperson for the city of Naperville did not immediately respond to a request for comment.

Since the Highland Park shooting, Democratic Gov. J.B. Pritzker has called for both a state and national ban on assault weapons. A bill pending in the Illinois House by Rep. Maura Hirschauer, D-Batavia, that would impose a statewide ban has 56 cosponsors.