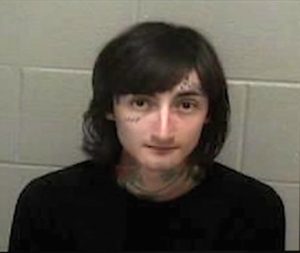 Robert Crimo III appeared before a Lake County Circuit Court Judge on Wednesday, Aug. 3 and pleaded not guilty to all 117 charges levied against him. He is accused of perpetrating the Highland Park July 4 mass shootings, which killed seven people and injured more than three dozen others.

Dressed in a blue county jail jumpsuit and facemask, Crimo III waived the formality of reading all the charges, as well as stating an understanding of the charges. Represented by a public defender, a bench or jury trial was not being sought at this time. He remains in custody at the Lake County Jail.

The defendant was initially charged with seven counts of first-degree murder July 6 —one for each of the seven victims killed in the attack. The Lake County Grand Jury returned an additional 110 indictments on July 26, after evidence was presented by law enforcement personnel and the Lake County State’s Attorney’s Office.

A statement issued by the state’s attorney’s office that day listed 21 charges of first-degree murder, three counts for each one of the victims. The subsequent indictments accounted for those victims injured in the attack, which included 48 counts of attempted murder and 48 counts of aggravated battery with a firearm.

“If found guilty of at least two first-degree murder charges, he (the defendant) would serve a natural life sentence without parole,” said Sara Avalos, the office’s communications specialist.

Prosecutors also indicated that if found guilty of discharging a weapon, an additional 25 years would be added and served consecutively. 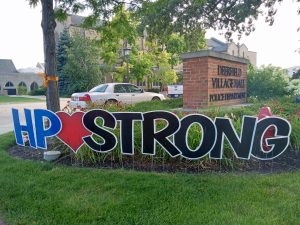 The message “Highland Park Strong” adorns signs and placards that can be seen at private residences and businesses across the city, and other municipalities like neighboring Deerfield. (Photo by Gregory Harutunian/for Chronicle Media)

The suspect was arrested July 4, nearly eight hours after being captured, and taken to the Highland Park police station where he allegedly confessed to the crimes. He allegedly climbed an unsecured fire escape ladder to a business rooftop near 2nd Street and Central Avenue in the Chicago suburb.

According to police reports, the assault began almost 10 minutes after the 10 a.m. step-off for the town’s Independence Day Parade. Armed with a semi-automatic assault rifle, Crimo III allegedly admitted firing on the crowd while nearly emptying three 30-round magazine clips of ammunition.

He eluded authorities and was dressed as a woman, although the weapon fell out of a blanket and was recovered. Investigators later found 83 shell casings on the rooftop. His path led five blocks away to his mother’s residence, where he took her SUV.

Driving to Madison, Wisconsin, he considered another shooting at a mass gathering before changing his mind and returning to Illinois.

His next court appearance is slated for Nov. 1.