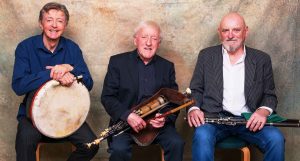 Members of The Cheftains are (from left) Kevin Conneff, Paddy Moloney, and Terry Molloy. (Photo courtesy of The Chieftains)

The Chieftains are making a farewell tour this year, called “The Irish Goodbye.”

The aggregation, founded in 1962, is tied to the authentic music of Ireland and bringing it to the world’s stages, while becoming cultural icons in the process. The recognition for their largely instrumental and traditional sound came, among the many other awards, with the 1989 title bestowed by the Irish government as “Ireland’s Music Ambassadors,” as well as a Lifetime Achievement Award at the prestigious BBC Radio 2 Folk Awards in 2002.

Their music has followed a winding path of different locations and collaborations for nearly 60 years, and this final tour is the last chance to see them perform with stops slated for Chicago Symphony Center March 6 (https://cso.org/home/), The Riverside Theater in Milwaukee, Wisconsin, March 7 (https://pabsttheater.org/events/) and at The Madison, Wisconsin Overture Center for The Arts, March 30 (www.overture.org/events/the-chieftains). It coincides with the month of St. Patrick’s Day.

Paddy Moloney, the group’s leader, formed the band in Dublin with Sean Potts and Michael Tubridy, and tours with longtime members, Kevin Conneff and Terry Molloy. Moloney, 81, plays a variety of traditional instruments, including the Uilleann pipes, button accordion, and Bodhran. Music intrigued him as a boy, starting with a plastic tin whistle, and by the age of 8, he was taking lessons from the Uilleann pipe master, Leo Rowesome.

Moloney corresponded with Chronicle Media, and that conversation appears in an edited transcript.

Chronicle Media:  Playing with various musicians presents a challenge. What memories do you have of spending the day with Huun-Huur-Tu, the Tuvan throat singers in what has come to be known as “Frank Zappa’s 1993 Salad Party,” at his UMRK Studios. How did you find common ground for the pieces? What was it like listening to the playbacks?

Moloney: One of the great things was, when we met up with Frank and everyone, it was at the BBC studios, then later at his home in L.A. At the studio, they were singing, and to me, it was almost like our Puirt-A-Beul (mouth music), except they could do two voices at the same time. The percussion is exactly like our Bodhran (percussion drum) except they must have bought it the day before, as it had a smell and hair still on (it). It hadn’t been manicured yet, which didn’t make any difference, it still sounded brilliant. Their rhythms matched perfectly with Chieftains’ rhythms, which I’m sure Mr. Zappa discovered before putting us together.

Chronicle Media: For definition, what is the difference between a reel and a jig? How do they differ between Irish and Scottish styles?

Moloney: Well as the joke goes, we gave the Scots the bagpipes … both countries are so close it was inevitable that they would come together in rhythm, style and folk tradition.

Chronicle Media: What do you attribute the longevity of Turlough O’Carolon’s (1670-1738) tunes being played to this day, and how does it affect your own music?

Moloney: A lot of Ocarolan music is related to other rhythms of traditional Irish music such as the Irish horn pipes and dance tunes. Carolan very cleverly added extra bars to a lot of his compositions, unlike the Irish horn pipe which would be a 16-bar tune, but has the same feel and fits perfectly in with our traditional playing.

Chronicle Media: What are the most difficult pieces to play for you? For the band?

Moloney: In my personal opinion, to play an air and take into consideration the lyrics in order to get across not only the music but the text of the song can be difficult but essential.

Chronicle Media: How did you learn to play this music, who were your mentors, and the people that encouraged you? What was life like where you grew up?

Moloney: Well, from the word go, when I was 9 years of age my pipe maker and tutor, Leo Rowsome, taught at the school of music (and) had great hopes and admiration for the style I was trying to achieve. Even at a young age, I was successful in competition, compared to other older kids and young adults. Leo was so encouraging and such a terrific mentor.

Chronicle Media: There are large Irish and Irish-American communities in the Chicago-Milwaukee area. Do you plan to visit with family and friends, reunions, and maybe slipping into a pub?

Moloney: In years past, we did a lot of visiting throughout the area with friends, families and wonderful fans. Now at this stage with the style of touring, and years of it, it’s more difficult to find the time to take off to visit with everyone, although we have many friends that we try to meet up with after the show.

Chronicle Media: What are your retirement plans?

Moloney: As my wife says, for the last 10 years, I’m in rehearsal for retirement.