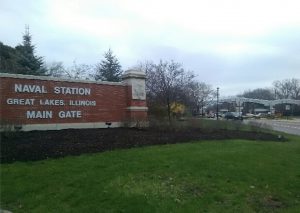 The Great Lakes Naval Training Center was listed as a target for a terrorist strike during recruit graduation in a criminal complaint against two Zion men. (Photo by Gregory Harutunian/for Chronicle Media)

Federal prosecutors filed a 26-page memorandum March 19 in the Northern District of Illinois Court seeking harsher sentences against two Zion men, who were found guilty of providing material support to a terrorist organization, during a jury trial in June.

The filing requests a sentence of 17 years for Joseph D. Jones, and 20 years for Edward Schimenti, who was additionally found guilty of lying to the FBI, during questioning.

While the spread of the coronavirus pandemic has held up the actual sentencing by U.S. District Judge Andrea Wood, the two men are tentatively set to appear before the bench within the next two months, when the courts reconvene.

Defense attorneys are expected to file opposing memorandums leading up to the hearing. During the trial, they had been allowed to use an “entrapment” plea in citing that the two men had not engaged in any substantive actions aligned with the charges, prior to the informant’s involvement.

According to the memorandum, filed by Assistant U.S. Attorney Barry Jonas, “The defendants believed that every phone equaled a bomb and each bomb would bring harm to enemies of ISIS. They showed no compassion for their intended victims, or families.”

An early morning April 12, 2017 raid by Federal Bureau of Investigation officers resulted in the arrest of the two 38-year-old Zion residents on charges of providing material support to a terrorist organization. They were arraigned later that day in federal court, before Magistrate Judge David Weisman, and both men acknowledged that they understood the charges.

At that time, a criminal complaint of more than 75 pages outlined evidence gathered by the bureau since September 2015. Documents included individual photos of the pair in face-blurring garb with Islamic State flags in front of the Illinois Beach State Park entrance sign, located at the intersection of Wadsworth Avenue and Sheridan Roads. Agency officials became aware of both men through their postings on Google Plus profile pages alleging empathy for ISIS causes with inflammatory propaganda.

The arrest came after the pair had driven an FBI informant to Chicago’s O’Hare International Airport April 7, 2017 where he would allegedly take cellphones collected and purchased by the pair to Syria for use as detonation devices in improvised explosive devices. They believed the informant was a supporter of Islamic causes. According to the complaint, Schimenti allegedly named the Great Lakes Naval Training Center as a target site for domestic terrorists.

The informant worked out with the pair at the same local gym, and led them to believe that he was a conduit with an ISIS network that could smuggle new recruits overseas for the effort, the complaint said. They were to continue providing cellphones through the contact’s “aunt.”

As the relationship grew with the informant, the pair allegedly showed him video footage from various websites depicting beheadings, torture, and the burning of captured soldiers.

Prior to their arrest, Jones was a college student and chef. Schimenti was employed at the Zion Cancer Care of America.

Schimenti was evidently involved in local politics at the community level. In part, he helped organize an April 2015 protest rally against the now-questioned shooting of Justus Howell, 17, by a Zion Police Department officer on a claim of self-defense.