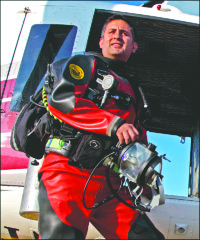 A Chicago firefighter will be remembered Oct. 6, during the National Fallen Firefighters Memorial Service.

Bucio, 46, died May 28, 2018, while conducting search and rescue operations for a missing boater. His name will be added to the National Fallen Firefighters Memorial on the academy grounds.

Bucio was born Jan. 25, 1972, to Magdalena and Leodegario Bucio in Mexico. The family moved to the United States in search of a better life. He learned English from schooling and watching cartoons.

He was a pool and beach lifeguard as a teenager. He became a Chicago police officer, entering the city’s Police Academy in 2000. He served as a patrol officer in the 18th District for three years before accepting an employment offer from the Chicago Fire Department, where he graduated from the Fire Academy in March 2004 with his first assignment downtown.

He was asked to join the CFD Air-Sea Rescue as a diver in 2007, a job he saw as his natural extension of his love for swimming and diving. He trained while balancing a family with two young sons, Joshua and Jacob.

On Memorial Day 2018, Bucio went on a call for a person in the Chicago River on the Near South Side.

He jumped from the CFD helicopter to search for the missing person. Bucio lost his life in the river during that rescue attempt.

Bucio is survived by his sons and eight siblings.

More than 5,000 people, including families, friends, members of Congress, administration officials and firefighters are expected to attend Sunday. Firefighter honor guard and pipe & drum units from across the United States will participate in the national remembrance.