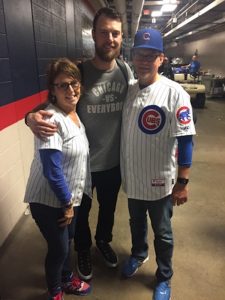 Ben Zobrist stands with his parents, the Rev. Tom and Cindi Zobrist, following the final game of the 2016 World Series. His parents attended all seven World Series games, returning Saturday, Nov. 5 to their hometown, Eureka, Ill. (Photo courtesy of the Zobrist family)

At the top of the 10th inning, the Cubs were tied with the Cleveland Indians, 6-6. For a time, Chicago held a 6-3 lead over the Indians, until the eighth inning, when Cleveland scored three, including a two-run homer off of closer Aroldis Chapman, tying the game. Then the rain came, and with it, a 17-minute delay.

Ben Zobrist’s family watched with white knuckles from Progressive Stadium’s lower box seats, as Ben stepped to the plate in the extra inning, Anthony Rizzo on first and Albert Almora Jr. on second with the go-ahead run.

“This was the biggest at-bat in his career. My heart rate was through the roof,” Noah, the youngest Zobrist brother, said. “To do what he did then, it was an absolutely incredible plate appearance. To stand there, in one of the biggest games in sports history, to pull through, at that moment … I can’t imagine what was going through his mind, but he had ice in his veins.”

Ben stood at the plate with a two-strike count. His next swing went foul. Then he connected, sending the ball whizzing past Indians’ third baseman Jose Ramirez, down the third-base line to deep left field. Almora scored and Rizzo took third base, wildly waving at Zobrist to stay at second.

It was a hit that would set the Cubs up for a world championship victory and establish Zobrist as the first World Series MVP in the history of Chicago Cubs baseball.

“We were all super-stressed out,” Ben’s younger brother, Pete, recalled. “When we went up 5-1, we were all happy-go-lucky and ready to set the cruise control and go through with the win. But that’s not how baseball works. It was a huge relief in the 10th … lots of high-fives and hugging and tears.”

“There was so much release and excitement for us, it all really didn’t hit us until Friday night,” Noah said. “Ben was done, and we could take a breath and relax and realize what the Cubs did and how much history was accomplished in those games.”

Thursday, the Cubs MVP greeted fans and signed autographs outside his North Center home in Chicago. The following day, Chicago colored its river Cubs blue, and hosted a parade where a reported 5 million fans gathered to celebrate their World Series champs. No one in attendance was alive for the last Cubs championship.

Later that night, Zobrist and his teammates gathered in Wrigley Field for a family exclusive fireworks show. Then Saturday, Ben, his wife Julianna and their young children, Zion, Kruse and Blaise were at Disney World.

Pastor Tom Zobrist, Ben’s father, was back at work Saturday morning at Liberty Bible Church in their hometown of Eureka, Ill.

“We went to every game,” Tom said. “In Cleveland, the Indians fans were very gracious and there were a lot of Cubs fans there, too, so there were many people cheering for both teams. It was great, it was big, it was loud there.” 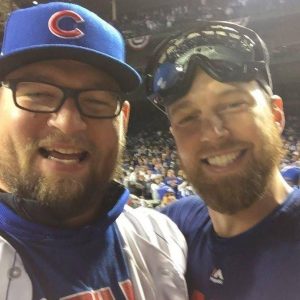 Traditionally a Cardinals fan, from youth, Tom and his sons agree they are fans of Ben, and have followed him on his odyssey from college baseball at Olivet Nazarene and Dallas Baptist universities, to his stint with the Houston Astros, followed by his major league debut with the Tampa Bay Rays.

In 2015, Ben was traded to the Oakland Athletics, then to the Kansas City Royals, who won the 2015 World Series. In December of that year, he agreed to a four-year contract with the Chicago Cubs.

“Some family are Cubs fans, some are Cardinals,” Tom said. “I raised Ben to be a Cardinals fan. My dad was a Cardinals fan, you just follow in your father’s footsteps. Now we haven’t been a fan of any team except those Ben’s played for.”

And baseball wasn’t always Ben’s pick of sports. He is known to have considered baseball a done deal after high school.

“He loved every sport that he played in. His favorite was whatever was in season,” Tom said. “Running cross country, basketball, soccer. He did well at every sport he was involved in.”

Each of Tom’s five children participated in athletics.

“They all played sports at some level, mostly youth and high school.”

Ben, at 35, is the second oldest behind his sister, Jessica. Serena follows, then Pete, 28, and Noah, 22. The Zobrists often played sports for a local youth Christian center and for school teams. As Ben progressed through college and major league baseball, he continued to mentor his family.

“Ben really just loves sports. He would coach me through all of the baseball stuff from hitting and throwing,” Noah said. “He would tell me how to focus on the release point, timing mechanisms and things like that. We would talk on the phone when he was in Florida and tell me what he was learning.”

While Ben was playing for the Rays in July 2012, he and Pete surprised Noah with a trip to Progressive Field in Cleveland as an early birthday present.

“Pete said, ‘Pack your bags, we’re going to Cleveland,’” Noah reminisced. “We played catch on their field and he gave me pointers. We hung out at the clubhouse and went under the field to their batting cage and took batting practice. We all stayed in a hotel together. It was a great trip, just us three brothers.” 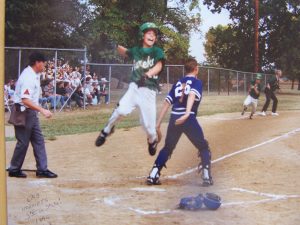 A young Ben Zobrist heads for home plate as a youth league baseball player for Eureka Middle School in 1995, a teammate close behind him. The team placed third in the state that year. (Photo courtesy of the Zobrist family)

To put it in other words, Ben Zobrist’s love of the game has not been tarnished by the celebrity and wealth, which follow a historical major league baseball career.

“About three years ago, after the season was over in Florida, the very next day he took his son, Zion, to a Little League game just so they could watch baseball together,” Pete said.

Known for being frugal, Ben, his brothers said, would likely not have bought himself a car such as the 2017 50th Anniversary Edition Camaro SS, which came with the World Series MVP title. He’s driven a Mazda, Noah said, and treats his contract with Chicago Cubs like a job, that will soon lead to retirement.

“We’re all so proud of Ben. He’s worked so hard on the field, done everything the right way. He’s a bold witness for Jesus Christ and a great role model,” Noah said. “That’s all you’re going to see from him, is that he’s an outstanding guy and he loves his family and his kids.”

Chicago Cubs and their fans hold the party of the century