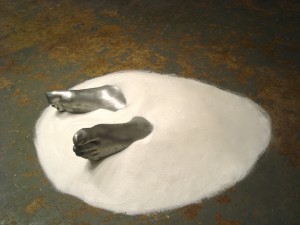 Art work that was part of the faculty exhibit at NIU’s School of Art and Design.

After a snafu, certified ballots for early voters have arrived at DeKalb County Clerk and Recorder Doug Johnson’s office.

Although early voting was supposed to open on Feb. 4, it took the Illinois State Board of Elections longer than normal to certify the ballots to local clerks, Johnson told the Daily Chronicle. He said about 10 people had stopped in to his office at 110 East Sycamore St. looking to vote, but agreed to return.

Other current locations and dates for early voting are:

NIU has 18,519 students taking classes this semester. The figure is 1,600 students less than in the fall. NIU officials attribute the drop to graduation, transfers and other factors.

Only a few days remain to view the 2015-16 Faculty Biennial exhibition, which features new work and current research of faculty from all divisions of the NIU School of Art and Design.

Every two years the biennial emphasizes the caliber of the faculty and the breadth and strength of the arts programs offered at NIU from various disciplines including fibers, time arts, visual communication and illustration, painting, sculpture, photography, ceramics, printmaking, metals and jewelry, and art history, and art education.

The work and research of 30 faculty and teaching staff are represented. Gallery hours are 10 a.m. weekdays and noon-4 p.m. Saturday. The NIU Art Museum is located on the first floor, west end of Altgeld Hall, located on the corner of College Avenue and Castle Drives on campus.

Future is bright for agriculture students

Are you or do you know a college student pondering a future career?

“It’s a wonderful time to be an agriculture student because of the tremendous career opportunities and growth of the agriculture market,” Rob Rhykerd, Ph.D., chair of the Department of Agriculture at Illinois State University, recently told Illinois Farm Bureau Partners, a magazine for Illinois Farm Bureau members. “At ISU, we have nearly a 100 percent placement rate for our ag students if they’re willing to relocate. The growing export market and global demand for food and ag products as well as demand for ethanol is spurring great growth in the ag sector, and our students are prepared and excited to add their talents to the industry.”

According to the magazine, a report from the U.S. Department of Agriculture and Purdue University confirms what Rhykerd sees. The 2010 study estimated that through 2015, there would be about 54,400 openings each year for agriculture and natural resource jobs and about 29,300 college graduates to fill them.

In addition to Illinois State in Normal, other statewide institutions with agriculture programs include University of Illinois and Parkland College in Champaign; Western Illinois University in Macomb and Illinois Central College in East Peoria, for a total of 31.

After more than four months closed to the public, the Illinois State Museum appears poised to reopen, although things wouldn’t be quite the same. Illinois Issues is reporting.

The state agency which controls the museum system recently announced tentative plans to reopen the flagship facility in Springfield and three of its five satellites, pending legislative approval.

Under the reopening plan, the museum would begin charging an admission fee and close the branches in Chicago and Rend Lake. The museum’s accounting and management structures would also be reorganized.

The system officially closed to the public on Oct. 1, 2015, at the direction of Gov. Bruce Rauner, who framed the closure as a cost-cutting move. Rauner planned to fire many of the system’s employees, but a lawsuit from AFSCME prevented unionized workers from being laid off. Those workers continued working behind locked doors during the public closure. Several non-union managers retired or found other jobs before the layoffs were to occur.

Shortly after Rauner announced plans to close the museum in June 2015, Sen. Andy Manar, D-Bunker Hill, sponsored Senate Bill 317 to keep the museum open. The bill passed the Senate in August and passed the House in November. On Feb. 5, Rauner issued an amendatory veto of the bill, calling for implementation of a fee system and partnerships with other public and private entities to help fund the museum.

“While the State is in the midst of a crisis caused by decades of fiscal mismanagement, as long as this bill fails to offer any plan to help the museum become self-supporting, it is just an empty and broken promise to the taxpayers of Illinois,” Rauner wrote in his veto message to the General Assembly.

The bill now goes back to the legislature for approval or an override vote.