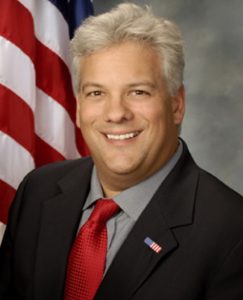 McHenry County Board Chairman Jack Franks is being investigated by Illinois State Police as part of a sexual misconduct and stalking investigation, following a search warrant being served on the offices of Illinois House Speaker Michael Madigan in Springfield.

“A probable cause exists for the crimes of criminal sexual assault, criminal sexual abuse, official misconduct, stalking, and aggravated battery,” according to wording in the document, obtained by the Chicago Sun-Times, through the freedom of information act.

The warrant was served Jan. 29, the same day that Gov. J.B. Pritzker gave his “State of the State” address in the Capitol building. Records sought with the warrant included personnel documents, files “containing information related to allegations of wrongdoing or misconduct by former state representative Jack D. Franks … reports or complaints related to sexual misconduct, harassment, stalking or other misconduct by Franks.”

The allegations stem from 2016, with allegations of sexual harassment between a state representative and a Madigan office employee. Franks’ tenure as a Democratic state representative for Woodstock was from 1999-2017. He abruptly announced his intention to return to McHenry County to run as its board chairman against Joe Gottemoller and became the first person to be elected to the position in Nov. 2016.

The Sun-Times reported that Madigan’s office stated it received a complaint on Nov. 19, 2018 regarding the 2016 incident, and his office began an investigation. They allegedly placed sanctions on Franks, and then spoke to the alleged victim who was offered safe haven. The victim refused to get involved initially, but eventually offered information.

By February 2019, Madigan’s office states they determined the harassment claims to be legitimate and contacted the Secretary of State Police’s Office to deny entrance to the Capitol building for Franks, if unaccompanied. As more information came to light, the situation escalated to possible criminal conduct. The victim was also later interviewed by the state police, who requested records from the speaker’s office Jan. 24. The warrant was served five days later.

In a Jan. 31 press release, Madigan stated, “Based on information received during the investigation, and subsequent to it, my office informed the proper authorities of the allegations and the investigation, including the Sangamon County State’s Attorney, the Secretary of State Capitol Police, and the Illinois State Police for further review and action. I remain committed to working to protect the victim and will see this matter to its conclusion.”

Franks has not been charged with any crimes and was unavailable for comment at press deadline.

“Jack Franks needs to step down immediately,” said state Sen. Jim Oberweis, R-25th,  in a statement, forwarded to the Chronicle. “The allegations made in the recent Sun-Times article are reprehensible and are inexcusable. It appears as though Mr. Franks and House Speaker Madigan were complicit in a cover-up to protect their power while further damaging the ability of women to come forward to bring to light the abuses suffered at the hands of those who were elected to represent and protect all of our families.

“My sympathies go out to the victims of his alleged terrible behavior,” he said.

This is the second major sexual misconduct incident to involve Speaker Madigan’s office, as the speaker’s former chief of staff, Timothy Mapes, was found to have conducted numerous unsolicited sexual conversations with female employees, along with alleged intimidation. He resigned in June, from his office duties and as a Democratic Party member.

“Illinois has a well-deserved reputation for corruption, and our governor talks like he wants to take it on,” said Oberweis, when contacted by phone. “Action speaks louder than words. We have a legislative inspector general to look into cases like this, and that office should be (allowed) to act autonomously.”