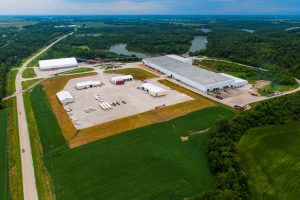 Long-range plans to bolster the Metro East economy by developing the Kaskaskia River as a commercial waterway, are finally getting back on track following the collapse of the Southern Illinois coal industry, according to officials at the Kaskaskia Regional Port District (KRPD).

Important developments at most of the district’s five port facilities have been announced over recent months, according to Ed Weilbacher, KRPD general manager.

All are in line with an ambitious 25-year strategic plan to re-purpose Kaskaskia River ports — originally established to load coal onto outbound barges — around both the inbound and outbound shipping of a broad range of commodities.

At KRPD Terminal 1 — the district’s once-idle primary facility just outside New Athens — outgoing coal shipment has been replaced by inbound barge offloading of limestone, used as “scrubber stone” for the power plant at the nearby Prairie State Energy Campus.

Originally constructed as a loading dock for Peabody Coal, the terminal has been idle since the demise of the coal industry.

An initial attempt to use the terminal for outbound grain loading operations, from 2000-07, was ultimately abandoned.

In 2008, the port sustained damage as the remnants of Hurricane Ike swept up the Mississippi Valley.

However, the terminal remains open to all shippers and district officials ultimately see potential for inbound and the reestablishment of outbound traffic in a wide range of commodities through the site.

A new development plan for the terminal was submitted to the district in June by the national engineering and planning consultancy, Hanson Professional Services.  The plan confirms that some weather-damaged equipment for outbound commodities at the port will need to be replaced, Weilbacher said

However, the port ultimately remains capable of transferring up to 3,000 tons of bulk material such as coal or grain from rail or truck to barges, according to the St. Louis Freightway, a regional trade organization.

Specialized facilities at the port include ramps for barge-loading of oversized equipment.

An adjacent Canadian National Railroad rail loop, which can accommodate trains of up 125 cars, could make the port ideal for shipment across the Midwest, district officials believe.

Downstream at KRPD Terminal 2 in Baldwin — the centerpiece of the district-owed Stanley L. Reeble Dock and Industrial Park — the Illinois Department of Transportation (IDOT) has issued a planning grant for expansion of the industrial park onto eight adjacent acres, and construction of a third dock at the river terminal.

Port officials say expansion is necessary in the wake of growth at two tenant companies: The Material Works, a high-tech metal recycler, and the regional agricultural cooperative, Gateway FS.

Gateway FS — which serves farmers in five surrounding counties — has purchased a total of 17.7 acres for expansion around Terminal 2. In addition to barge-loading crops from area farmers, the co-op over recent years has developed automated, dry and liquid fertilizer distribution centers at the terminal and provides bulk commodities for farm use.

A third tenant company, Kaskaskia Shipyard, is in the process of building its third towboat at Terminal 2.

The route of the proposed Southwest Illinois Connector, a planned new four-lane state highway, would come near the port.

The port district board formally announced its acceptance of the IDOT planning grant for KRPD Terminal 2 on Aug. 15.  The $90,000 state grant will be matched with $30,000 in port district funds. Requests for qualifications will be sent out shortly to select a consultant to work on the master plan.

Another eight miles downstream, at the district’s Evansville Grain Terminal, in unincorporated St. Clair County, Gateway FS operates a “river house” terminal, barge loading up to 350,000 bushels per day of wheat, corn, and soybeans from the co-op’s grain elevators throughout the area.

Tenants are now being actively sought for the district’s newest acquisition and northernmost property, the KRPD Fayetteville Terminal, near Belleville.

Long-term, the district hopes to make the terminal a primary or secondary fuel supplier for Scott Air Force Base; with fuel transported by barge to the terminal and then transferred to the base through a proposed 17-mile pipeline. Base officials are reportedly interested, but are also considering a longer pipeline directly to a refinery.

Short term, the district hopes to distribute gravel and other aggregates through the Fayetteville Terminal. An access road to the terminal was completed in about 2014.

Plans for revitalization of the district’s Kellogg Dock on the Mississippi River were also unveiled in June.

However, district officials remain convinced that, offering lock-free shipping downstream and an adjacent 350-car railyard, owned by the port with connection to the Union Pacific Railroad, the dock will ultimately find clients.

The Kaskaskia Regional Port District is the 71st largest port in the United States and the ninth-largest inland port in the country.

Headquartered in Red Bud, the port district was created in 1965 by the Illinois General Assembly to promote industrial, commercial, transportation, and economic activities on the Kaskaskia River, make development sites available along the river, and thereby add to the economic vitality of Monroe, Randolph, and St. Clair counties.

The district’s overall 25-year strategic plan was finalized in 2014; setting down almost two dozen objectives for establishing the Kaskaskia as both an important economic engine and a recreational center for the region.