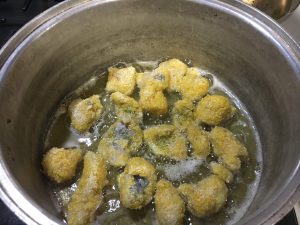 We tend to look down on catfish. It’s probably the way they make their living.

They troll river bottoms, scooping up what would make more popular creatures like trout and perch turn up their little fishy noses.

Personally, I always felt more positive than that about catfish. I, too, grew up a bottom-feeder.

Unusually small as a child, my eyes were therefore closer to the ground. That may be why they were typically focused on the gutters, looking for what big people had disdained, forgotten or mislaid while living their fancy-pants lives way up there among the clouds.

I learned not to show off the amazing things I found, like buffalo nickels and hardly rusted safety razors and bullets at various stages of use. Taller people tended to be suspicious.

“You’re not finding things before they’re lost, are you?” my father asked.

Despite his distrust, he shared my liberal attitude toward catfish. On a family vacation in Kentucky, in a diner festooned with signs screaming “FRIED CATFISH,” he and I were the only ones in our party who thought it was a good idea to get some of that. We were catfish virgins, but eager and unafraid.

A friendly fellow in a grease-spotted apron brought me a plate dominated by two catfish steaks, each two inches thick and five inches long, back to belly. He assured me that they had been carved from an animal that had been alive and happily swimming in Lake Barkley the night before.

A handful of hushpuppies and some home-fried potatoes fought for space on the plate. Nothing green despoiled the insistent brownness.

All of that was set down in front of a kid who typically ate so little that it was unclear he would ever be big enough to reach the line marked You Must Be This Tall to Ride.

But for me, fried catfish was a revelation. It was undoubtedly the best thing I had ever put in my mouth up to that point. Prior to that moment, I had never really experienced nourishment that changed my point of view.

I had discovered what was meant by the phrase “comfort food,” which probably hadn’t been invented yet. But still.

It’s a phrase that is used a lot lately. For many of us, the most positive thing we do all day is prepare meals. Comfort food, I’m told, is a significant presence in Cuisine Coronavirus.

I felt comfortable enough that day, years ago, to total that enormous pile of fried food. My parents made such a fuss over that miracle that the cook came back out to see what was going on.

When he saw, he asked me quietly, “Would you like another one?”

Here, I have to explain a concept foreign to readers under the age of 40. Back in the day, a kid was not allowed to answer any question in a way that might lead to another person spending money.

So I just casually slung a puppy-dog look at my father, who was stunned enough to actually give the go-ahead. And a family legend was born.

It was usually retold on nights when we had beef. My father was very good at procuring excellent meat, but he insisted that it be cooked to an unrecognizable doneness. In the hope that I would actually eat it, somebody would drag out the fish story while I escorted the rubbery meat  from one side of my plate to the other. Nobody else seemed to think there should be a difference between one’s taste for perfectly fried fish and warmed shoe leather.

We never went back to Kentucky, and my mother never fried catfish. Ritta Leavitt did, however, conquer comfort food.

She was very good at tomato sauce. So good, it turned out, that she secretly taught one of the Italian neighbor ladies how to do it better.

She was also good at something that went under the sauce: lasagna. This, she would not teach anyone. “I will take the lasagna recipe to the grave,” she promised. She finally relented and gave it to my sister Lee.

Between the two of them, they made fantastic dishes that brought comfort to their families over the years. Of course, they didn’t both make it quite the same. That was part of the beauty of it. They made not just something wonderful to eat, but something to compete over and talk about.

Neither of them would tell me how they did it. But I watched, and I got most of it, though not enough to really be up to snuff. So I always made mine vegetarian, so it would be different enough to not suffer much by direct comparison.

As the years went by, Mom got good at cooking almost everything. Even beef. She made it perfectly, then burned part of it for my father.

In recent months, I have heard from a lot of folks about how they are making great mounds of comfort food because, they say, they’re short on comfort. I am surprised at how many things are referred to this way. They include macaroni and cheese, meatloaf, pastitsio, homemade bread with jam, pulled pork, toasted cheese, brisket and, amazingly, peanut butter and jelly on white bread.

The peanut butter sandwiches seem comforting mainly because they remind us of childhood. They’re not notable for much of anything else, though it is hilarious to watch somebody feed one to a dog.

The folks who make comforting PB&J seem to go the whole hog, and try to make it exactly like they got it when they were kids: with the crusts cut off or with the same brand of peanut butter.

I can’t go back to Kentucky and replicate those catfish steaks. I tried to make them myself, and never quite got it right.

But my catfish comfort evolved.

When I was driving a cab, I found a hot dog stand in the shadow of Cabrini-Green called Sammy’s Red Hots, which sold something very un-dog-like: the Cat Snack. It was a few bony hunks of fried catfish with some fries, a roll and hot sauce. You could get a little tartar sauce, too, which is necessary, because catfish needs that like flowers need rain.

Sammy’s Cat Snack would often make my day. When you’re driving around housing projects, you can always use a little comfort.

And then, about 10 years or so ago, I discovered catfish nuggets.

They are little chunks of raw catfish packed in plastic bags, available in frozen food departments for less than $4 a pound. Miraculously, they are nearly bone-free.

I experimented with different kinds of breading, but eventually settled on the simplest method imaginable. I dunk all the fish pieces in stirred-up eggs, then take them out and roll them around in a shallow bowl of unbleached flour.

I heat up a half-inch of grapeseed oil, which is ready when a few drops of water jump and crackle. The fish nuggets are fried until they’re crusty on one side, then turned over.

They get salt and pepper and cayenne as soon as they go on the drying rack.

My daughter got her first taste of catfish at around 10, about the same age as I was when I found it in the Tennessee River Valley. She unaccountably likes her nuggets with ketchup, but get this: They’re her favorite food, even today.

How could that happen, across all these years? She’s never even been to Kentucky.

At the end of her winter break, we fried up some nuggets, along with some French fries. I drove her to the Greyhound the next morning. I’m not sure which one of us needed the catfish comfort more, her or me.