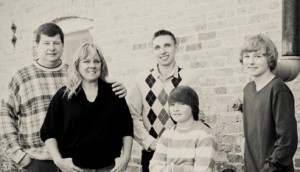 Doug, his wife Kathie and their three sons.

Providing for his family wasn’t enough for Doug Close, so he looked into making McHenry County more sustainable.

Ultimately, that passion led him to get involved in the Food Shed Co-op.

The name, Food Shed Co-op, conjures up a roadside stand or a buying club. However, the name, like other aspects of the business, came about in a mindful manner.

The definition of food shed includes where a food is produced, where it is transported, and where it is consumed. That definition includes the land it grows on, the routes it travels, the markets it goes through and the tables it ends up gracing.

Although Close’s interest in environmental concerns led him to Food Shed Co-op, the global economic crisis in 2008 played its part. That’s when Close became aware of the vulnerability a wide-ranging dependency creates for a local economy.

He began promoting awareness of the Transition Town model of building resilient communities. In 2013, the seeds of Food Shed Co-op began to germinate.

Food Shed Co-op is a locally owned and operated grocery store. The store procures locally grown meats and produce, many of which are organically grown.

This model reduces the carbon footprint by reducing miles the products are shipped. It also avoids industrialized farms and petroleum-based soil enhancers, herbicides, and pesticides.

“It’s better for the local economy, since more of the farmers’ and artisans’ money stays in the county,” Close said.

Anyone can shop at Food Shed Co-op. The advantage of being an owner is that owners determine the prices and get a rebate based on the profitability of the store. Individuals or businesses can be owners.

The board follows a tried and true development timeline successfully implemented by the 300 food cooperatives around the country. Food Shed Co-op owners are about one-third of the way to full membership and breaking ground in 2017. A grant of $20,350 from the USDA’s Local Food Promotion Program in 2014 helps bring funds and credibility to the group. The target location is along the Route 14 corridor, somewhere between Crystal Lake and Woodstock.

In the meantime, a “group of regular folks” are out there spreading the excitement about the new wave toward a return to local resiliency and self-sufficiency.

The Food Shed Co-op joins the Crystal Lake Brewery for their First Friday Beer Tasting event each month. On Saturdays, volunteers are at Soulful Prairies pruning and weeding, or at Ethereal Confections discussing the benefits of locally owned businesses and cooperatives.

For Close, he sees the Food Shed Co-op as the beginning of something important. He says putting in all the volunteer hours after he’s put in a full day at his paying job is a great investment.

“Just knowing that I’m doing my best to make a difference is rewarding. This will pave the way for more,” Close said. “It’s so important to educate people on the importance of food. We need to understand where our food comes from and what’s in it.”