Illinois’ first female caucus leader in the General Assembly, Christine Radogno (R-Lemont), was lauded by both Democrat and Republican lawmakers when she announced June 28 she was stepping down as of July 1.

At a press conference, the social-worker-turned GOP leader, begged her fellow legislators to compromise and agree on a budget in the last days of a second year of a destructive impasse.

“We need fundamental change in this building, but we need to compromise in order to get there,” she told reporters. “I emphasize again the critical, critical nature of doing this. We have to put aside personalities. We have to prioritize what we want,” she said. “Nobody gets 100 percent.”

In the 2010 election, Brady won the GOP nomination by fewer than 200 votes, and then lost to Democrat Pat Quinn. He finished fourth in the 2014 GOP governor’s primary, defeated by Rauner.

Brady had been working as Radogno’s top deputy, the Chicago Tribune reported. 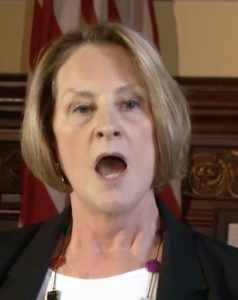 Radogno took steps on the budget – collaboratively — after a December failure in negotiations between Gov. Bruce Rauner and House Democrats. Partnering with Democratic leader Sen. John Cullerton (D-Chicago), Senate lawmakers hammered out a package of 12 “Grand Bargain” bills they thought both parties could get behind.

But after the Senate passed five of the dozen, Rauner allegedly torpedoed the package in February by arm-twisting Senate Republicans in a series of private meetings. He then released his own budget Feb. 15, to the catcalls of Democrats who held up signs calling it “Fake News.”

Senate Democrats then raced to create and pass, with a simple majority, an alternate budget, incorporating some of the compromises the Radogno and Cullerton team had initially proposed. But that stalled May 31, when the House declined to take up the vote, and Rauner called the Senate plan “phony” and said he couldn’t support it.

“She was the one who first reached out to me to start the Senate effort to show that we could balance the budget,” wrote Cullerton in a statement. “Frankly, this week’s leader meetings wouldn’t be occurring if it wasn’t for her,” he wrote. “I will miss her camaraderie and common sense. But I also hope that she has a few tricks left up her sleeve before July 1 to help us finally get out of this mess.”

The General Assembly could not agree to a budget before the fiscal year ended Friday.

“I have done the job to the very best of my ability, and always with the needs of the state and my constituents in mind,” Radogno, 64, wrote in a statement. “I’m proud of my legislative accomplishments, none of which were achieved alone… I did my best. That’s all I could do. It has been a privilege to serve. But now I am looking forward to returning to private life and spending time with my family, especially my five grandchildren.”

Described by some Springfield-watchers as “one of the few grownups in the room,” Radogno served for 20 years and was first elected to Senate leadership in 2009. She was known as a moderate, unafraid to roll up her sleeves and willing to compromise, if necessary.

“Leader Radogno encouraged bipartisanship and respect among all members of the Senate,” said her Democrat colleague Don Harmon (D-Oak Park). “As conversations at the Capitol became increasingly partisan and polarized, and as the budget stalemate dragged on, she saw the wisdom of reaching across the aisle and negotiating with Democrats on a grand bargain to break the costly impasse,” he wrote.

In June 2014, Radogno suffered a family tragedy when her daughter Lisa died in Washington D.C. of a massive pulmonary embolism at age 31.

Rauner was gracious as Radogno stepped down.

“It’s been an honor and a privilege to work alongside Leader Radogno these last two years,” the governor said in a statement. “She is a consummate professional and public servant, who has championed fiscal responsibility and human services that help our most vulnerable residents.”

For her part, Radogno did not display any public ill-will toward the governor as she made her exit.

“I feel strongly the governor has the right agenda, but it’s not that easy getting there,” she said.