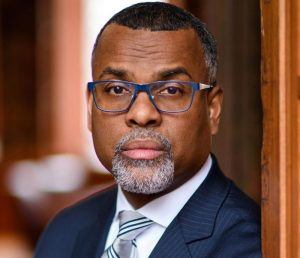 Distinguished professor and author Eddie S. Glaude Jr. will present “Democracy in Black” at 7 p.m. Thursday, Jan. 14, 2021, via Zoom. The virtual event is Illinois State University’s Martin Luther King Jr. keynote address. Registration for the event is free and a Zoom link will be provided.

Glaude is an intellectual who speaks to the complex dynamics of the American experience. His most well-known books, “Democracy in Black: How Race Still Enslaves the American Soul”, and “In a Shade of Blue: Pragmatism and the Politics of Black America”, take a wide look at black communities, the difficulties of race in the United States, and the challenges our democracy face.

He is an American critic in the tradition of James Baldwin and Ralph Waldo Emerson. In his writings, the country’s complexities, vulnerabilities, and the opportunities for hope come into full view.

Glaude is the James S. McDonnell Distinguished University Professor and chair of the Department of African American Studies, a program he first became involved with shaping as a doctoral candidate in Religion at Princeton.

He is the former president of the American Academy of Religion. His books on religion and philosophy include” An Uncommon Faith: A Pragmatic Approach to the Study of African American Religion”, “African American Religion: A Very Short Introduction”, and “Exodus! Religion, Race and Nation in Early 19th Century Black America”, which was awarded the Modern Language Association’s William Sanders Scarborough Book Prize.

Glaude’s most recent book, “Begin Again: James Baldwin’s America and Its Urgent Lessons for Our Own”, was released on June 30.

He is a columnist for Time Magazine and an MSNBC contributor on programs like “Morning Joe”, and “Deadline Whitehouse with Nicolle Wallace.” He also regularly appears on “Meet the Press” on Sundays. Glaude hosts the podcast AAS 21, recorded at Princeton University in Stanhope Hall, the African American Studies department’s home.

For questions email Presidential and Trustee Events at universityevents@ilstu.edu or 309-438-8790.

This event is presented by the Office of the President, University Housing Services, and the Association of Residence Halls.