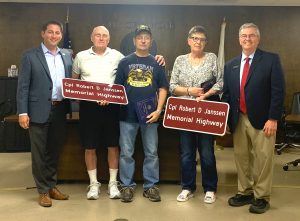 Interstate 39 around Minonk has now been officially dedicated as the “Cpl. Robert D. Janssen Memorial Highway,” in honor of Cpl. Janssen, a soldier from Minonk who lost his life in Vietnam.

“It’s important that we remember the brave sacrifices of those who have given their lives in defense of our country,” said State Sen. Jason Barickman. “Cpl. Janssen is a hero and I hope this dedication will help to keep his memory alive.”

“Our state and our country are grateful to Corporal Robert Janssen and his family for his sacrifice,” said State Rep. Tom Bennett. “It is a privilege to be here with his friends, family and community members to honor his important service to our nation.”

Senate Joint Resolution 15, filed by Barickman and sponsored by Bennett in the House, designates Interstate 39 near Minonk (Exit 22 – 27) as the “Cpl. Robert D. Janssen Memorial Highway.” The road was formally dedicated on May 17th, at a ceremony attended by friends and family of Janssen, the legislators, and local officials.

“Seeing the community come out for this event was so special, but also some past classmates and old friends who shared great memories. I am very thankful,” said Charlene Mattox, Cpl. Janssen’s sister.

“We fought without America’s support, we returned without Americas welcome, but we will always be the best America had. God bless our Vietnam veterans,” said Tom Palmore, a longtime friend of Janssen.

Cpl. Janssen was born in Bloomington in 1948, graduated from Minonk-Dana-Rutland High School in 1966, and eventually worked at the B.F. Goodrich plant in Henry. He entered the Army on in July of 1967, trained at Ft. Leonard Wood and Ft. Lewis, before being stationed in Germany. He was reassigned to Vietnam and arrived there in April of 1968. Janssen was killed in action in Vietnam on June 3, 1968.