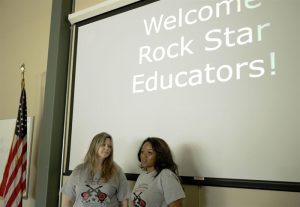 Editor’s Note: Lee Enterprises reporters Lenore Sobota, Kelsey Watznauer and Lyndsay Jones of The Pantagraph in Bloomington; Valerie Wells of the Herald & Review in Decatur; and Rob Stroud of the Journal Gazette/Times-Courier in Mattoon-Charleston contributed to this story.

East central Illinois school districts have an even greater difficulty filling teaching positions than the statewide average, according to a new study from a regional superintendents group.

The COVID-19 pandemic has made matters worse as rural districts brace for lasting effects in the years to come.

Kyle Thompson, regional superintendent for the 11th Regional Office of Education, said it gets more difficult every year for schools to fill positions, and he believes the worst is yet to come.

“For a while it was, ‘Well there’s a shortage in Spanish, or there’s a shortage in FCS (family and consumer science).’ And, over time there’s just a shortage in everything; now everybody’s in a panic,” Thompson said. “But we put out this survey every year and, it’s the same results every year. A lot of times, the State Board (of Education) or the General Assembly they’ll put a Band-Aid on an open wound that needs stitches and has an infection and that doesn’t solve the problem.”

The Illinois Association of Regional Superintendents of Schools on March 1 will release its 2020 Illinois Educator Shortage Study that shows 77 percent of the 591 school districts responding to the survey believe they have a teacher shortage problem, with rural areas being hit the hardest.

Seven regions were established for the survey. With 84 percent of east central Illinois district respondents reporting having at least a “minor” teacher shortage, the region was above the state average but in the middle of the seven areas surveyed.

Despite this region being home to two of the state’s top teacher producers — Illinois State University and Eastern Illinois University — the more rural districts are finding it harder to fill new positions each year.

Teacher shortages are not new to the state, but Thompson said matters began to worsen when the State Board of Education made EdTPA, a performance-based national assessment for licensure, a state requirement to become a teacher.

Jontry said some state education officials have considered eliminating certain testing requirements as well as making “alternative licensure programs” more accessible for disadvantaged populations and those coming from a different career. That might include adjusting the structure and scheduling of the process, he added.

“We’ve got to look at the barriers that are currently there to prevent people from entering the field for whatever reason — whether it’s testing, whether it’s coursework, whether it’s the structure of our teacher preparation programs — to make them more accessible,” Jontry said.

There is also concern that increased responsibilities for teachers and criticism of educators for the way learning has been handled amid the COVID-19 pandemic could hurt recruitment.

The pandemic has exacerbated shortages that already existed in disciplines like science, math and special education, Jontry said.

Districts in that area, he said, “had some teachers that have probably chosen to retire a year or two earlier than they were going to” because of the pandemic. He said there aren’t enough teachers available to fill those spots.

“Everybody should just understand that we always seem to have positions that go unfilled in our region, and while we are, relatively speaking, better off than most, it continues to be a concern that we’re going to be getting to a point where we’re unable to offer some programs,” said Jontry, a member of the IARSS Educator Shortage Committee.

The survey also shows that 21 percent of districts in the east central region reported canceling classes or programs due to shortage of qualified applicants. A total of 58 classes were reported canceled as a result, according to the survey.

“We’ve got to make the profession attractive,” Jontry said. “I think more and more is asked of our teachers and we have to, kind of, reset and think about … what things we really shouldn’t be able to expect of our schools.”

​The teacher shortage crisis hasn’t hit Bloomington District 87 as hard as other parts of the state, thanks in part to having the state’s major producer of new teachers, Illinois State University, in its backyard. The Mattoon school district in western Coles County reported a similar situation due to the availability of student teachers and recent graduates in this field from nearby Eastern Illinois University.

But these school districts are still concerned about the future.

“The real challenge to this is retention. Once you employ a good teacher, you want to retain a good teacher,” Skocy said, adding that Mattoon’s retention rates have declined from 90 to 92 percent to 86 to 88 percent in the past decade.

Retention is especially difficult for rural school districts because there is not as much of a draw for teachers to relocate to rural areas.

Many rural school districts are also found competing with surrounding districts for teachers to fill positions and are starting to see trends with teachers relocating more than they used to.

Thompson referred to it as a “teacher carousel” with neighboring districts.

As a result, there has been an increased effort to recruit from within existing districts.

“Grow-your-own” programs have increased in Illinois high schools, creating a pipeline for future students by giving them the opportunity to learn about and experience teaching before they graduate. Some schools partner with their local community colleges and universities to offer dual credit courses while their students are still in high school, including McLean County Unit 5.

Thompson said the teaching profession has changed significantly and students are coming to school now with greater needs. The number of families living below the poverty level has increased exponentially in his region over the past decade. The social and emotional well-being of students is also a concern, he said, as rural areas lack social workers and other mental health resources.

But for now, Thompson is focused on filling an open math position at one of his schools.

“We, as a state, just have to keep working towards finding some more solutions, but the longer this goes on, the worse it’s going to get.”