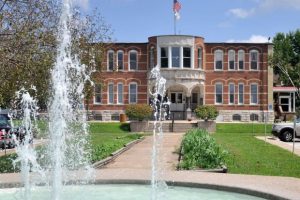 Choate Developmental Center is pictured in Anna. (Photo by The Southern Illinoisan)

SPRINGFIELD – Documents filed in a southern Illinois court this week allege a Choate Mental Health and Developmental Center senior staff member obstructed an Illinois State Police investigation into the abuse of a developmentally disabled patient by accessing confidential investigative files and directing staff to speak to the victim before police did.

Gary Goins — who remained on the state payroll as of Wednesday, March 9 — was the quality assurance manager at Choate in 2020 when Choate staff member Kevin Jackson was accused of repeatedly striking a developmentally disabled patient with a belt.

According to court documents filed on March 7 in Union County, Goins accessed investigative files for the DHS Office of the Inspector General. He then sent emails directing staff to speak with the victim before the Illinois State Police Division of Internal Investigation interviewed the victim, the documents stated.

Prosecutors alleged Goins “intended to gain advantage in defense of his and other administrators’ actions” regarding Jackson’s alleged criminal conduct. The action was taken “in advance preparation for the investigation of those acts by Illinois State Police,” according to court documents.

The victim allegedly changed her account of the incident after speaking with staff, and it no longer matched that of the eyewitnesses. This was documented in a medical chart note that was later amended at the direction of Choate administrative staff, the court document stated.

Neither Goins nor his attorney Wesley Wilkins could be reached for comment.

The court filing also mentions other unidentified senior staff members at Choate who allegedly participated in the cover-up.

Center Director Bryant Davis and Goins were indicted last June and are awaiting trial on felony charges of official misconduct for obtaining and reviewing confidential investigative files of the inspector general’s office.

A third Choate administrator, Teresa Smith, was also charged with official misconduct and obstructing justice in 2021, but those cases were dismissed. Smith was indicted by a grand jury on the same charges in 2022. The cases were subsequently dismissed by a judge.

Smith, Bryant and Goins remained on the state’s payroll as of March 9, according to the Illinois Comptroller’s database of state employee pay. Smith’s most recent monthly salary was $8,974, Davis’ was $9,555, and Goins’ was $8,140. Their status with the Department of Human Services is not clear.

The aggravated battery charge against Jackson is still pending. A case management conference is scheduled for March 14 in Union County. He is not listed on the comptroller’s payroll database.