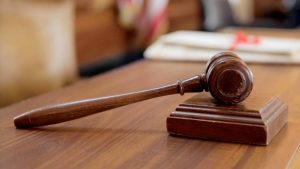 A chemist has been ordered to pay more than $335,000 in restitution for illegally storing hazardous waste in St. Clair County.

Lawrence Rutledge, 57, of Belleville, will need to pay $335,934 to the U.S. Environmental Protection Agency for clean-up expenses associated with the waste as part of his five years on probation.

Rutledge pleaded guilty in July to illegally abandoning a laboratory full of chemicals.

In 1997, Rutledge started a business, Advanced Asymmetrics, Inc., to synthesize specialty chemicals for the pharmaceutical industry. The business was located inside a commercial building at 109 S. Kossuth St., Millstadt, in close proximity to a residential area and a senior living home.

Over time, Rutledge accumulated numerous containers of chemicals and chemical waste at the Millstadt facility. Sometime around 2011, Rutledge stopped paying the county property taxes on the facility, and over the next few years, the electrical service and the water service (both water supply and sewer) to the facility were shut off.

In 2015, employees of the Illinois Environmental Protection Agency and the U.S. EPA entered the facility and discovered hundreds of containers with labels indicating the presence of acids, caustics and other chemicals, as well as hazardous waste. Some of the metal containers had rusted and crystallization had started to occur on metal surfaces. Some had even fallen over and broken open. Sodium cyanide, which is extremely toxic, was stored within 1 inch of a container containing acid, presenting the potential formation of cyanide gas. Investigators also discovered a container labeled as a shock-sensitive picric acid, which is highly explosive.

“The defendant’s abandonment of hazardous chemicals created a highly dangerous situation,” said Special Agent in Charge Jeffrey Martinez of EPA’s criminal enforcement program in Illinois. “Companies should take notice that EPA and our law enforcement partners will enforce our hazardous waste laws that protect our communities and the environment.”

The investigation was conducted by the U.S. EPA – Criminal Investigation Division and the Illinois EPA – Collinsville Field Office.