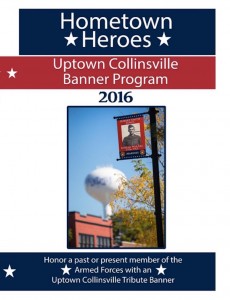 Collinsville-area military veterans will soon be honored through a new street banner program along the thoroughfares of Uptown Collinsville.

Under the new Hometown Heroes program, up to 145 banners, with the images of veterans and information about them, will be displayed on light standards in Collinsville’s central business district for a three-month period, including Veteran’s Day, each year.

The program will honor veterans from all eras of American military service, according to project organizer Pat Reitz. Applications for tribute banners are now being accepted.

Several cities on the east coast, as well a few in California, have similar street banner program honoring military veterans, Reitz said. However, the Collinsville project will apparently be the first multi-year program of its type honoring a range of military veterans in an Illinois town, she believes.

Some fallen veterans are being remembered with memorial street banners in Highland, she notes.

Reitz was inspired to launch the tribute banner project here, after she and her husband, 20-year Marine Corps veteran Leonard Reitz, noticed a similar program in Pennsylvania.

“We were traveling in October for my family reunion and stayed in Eohrata, Penn. overnight. When we left the next day, we drove down Main Street and saw military banners lining the street. It was very touching to see the patriotism. I decided it would be a great idea for Collinsville,” Reitz said.

“He really liked the idea being a vet himself and agreed to the program right away,” Reitz said.

Families or friends of military veterans can arrange for tribune banners by submitting a photo of the veteran, name and other required information, and a sponsorship fee. Each banner will be 22 inches by 36 inches and include the veteran’s name, rank, era of service, and years in the military.

The Collinsville American Legion and Veterans of Foreign Wars posts support the program and have made available fliers on the project. Collinsville City Hall is providing guidance. Reitz has not sought corporate support for the initiative.

About 15 banners were ordered over the first three weeks they were offered, Reitz reports, with orders for five more pending. Orders will be accepted until July or until all 145 of banner locations, allotted along Main Street and a portion of Vandalia, have been filled.

When submitting an order for a tribute banner, sponsors should select one of the follow eras of service:

The sponsorship fee for each banner is $100.

The banners will be displayed annually along the streets of Uptown Collinsville for several years, according to Reitz.

The banners will then be provided to the family of the veteran, she said.

Order forms for Collinsville Hometown Heroes banners can be obtained by contacting Reitz at Lpreitz@att.net or (618) 346-7890.

— Collinsville community to support veterans all through the streets —