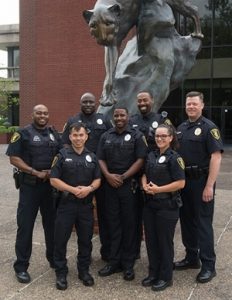 Schmoll has implemented the University’s commitment to a diverse work force and an inclusive community by adding four officers of color to the department during the past two years. Schmoll started a mentoring program where he advises African American and other SIUE criminal justice students to guide them through the hiring and testing process to become a law enforcement officer.

“I am honored to be receiving this award and also extremely humbled,” Schmoll said. “We are striving to create a police department that reflects SIUE’s diverse community.”

A Red Bud native, Schmoll joined the SIUE department in 1994. He quickly moved through the ranks from patrolman to a detective for investigations to sergeant.

He was promoted to lieutenant in charge of the SIUE patrol division in January 2005 before being appointed to chief.

The SIUE Police Department is open and accessible to the University community 24 hours a day.