Illinois Department of Transportation has tagged the Interstate 270 bridge across the Mississippi River for major work and replacement. (Photo courtesy of IDOT)

Several potentially landmark projects are key to major economic development projects which could help reshape the region, according to area business and political leaders. Among them: replacement of the Interstate 270 bridge across the Mississippi River, a new U.S. Route 67 bypass near Jerseyville, a new Interstate 255 interchange at Dupo and the new Greenmount Road interchange in O’Fallon.

IDOT acknowledges that many — including extensive projects on Interstate 255 and the Interstate 64 tri-level interchange area in East St. Louis — will mean years of traffic slowdowns and tie-ups.

The I-255 project will entail the phased closing sections of between Collinsville Road to Route 15 for months at a time next year.

The projects are part of Gov. J.B. Pritzker’s $41.5 billion Rebuild Illinois program. To pay for it, Illinois on July 1 raised the state gasoline tax, from 19 to 38-cents-a-gallon and increased vehicle registration fees.

While 16 percent of funding under the program would go “to strategically expanding the system in areas where data have shown the investment will be highly effective,” the plan will dedicate 75 percent of funding to reconstructing and preserving roadways and bridges, according to an IDOT statement. The remainder targets necessary traffic and safety improvements.

That marks a major shift toward long-term infrastructure preservation, according to the IDOT statement.

A few of the projects (noted below) are to begin in state FY 2020. However, most are scheduled for state fiscal years 2012 through 2025. The road program was announced Oct. 10. The road plan at this point remain technically in the proposal stage and IDOT continues to take public comment on it.

Interstate 64/U.S. Route 50 from just west of Greenmount Road in O’Fallon to 1.1 miles west of Illinois Route 158 — Construction of additional lanes and resurfacing.

A new interchange on Interstate 255 at Imbs Stations Road and Davis Street Ferry Road in Dupo is scheduled for construction during 2025.

That includes road and bridge expansion and reconstruction across the 2.3-mile Mississippi River bridge approach — extending from the river to the Chair of Rocks Canal.

U.S. Route 67 at the Delhi Bypass in Jersey County — Construction of 3.2 miles of new four-lane expressway will provide a bypass around the community of Delhi.

The IDOT plan also calls for preliminary work on future widening of U.S. 67, from two to four lanes, north from Jerseyville into Green County as well as south to the Madison County line.

The IDOT program also calls for projects on the Clark Bridge (U.S. 67) and the deck sealing;  intersection reconstruction at Formosa Road-Bethany Road on U.S. Highway 40 ($24 million);and road and bridge work long U.S. Highway 50 at various locations from Silver Creek east through Clinton County, including Kaskaskia River bridge repairs. All are scheduled for 2020.

Illinois Route 3 Connector – extending across East St. Louis from Monsanto Drive in Sauget to the River Park Drive Connector – is the centerpiece of maintenance and improvements on the highway extending from it north terminus in Godfrey to its southern terminus in Cairo.

In addition to the new $49 million connector roadway – with its new bridge and a newly-built approach through Sauget – the IDOT plan for Route 3 calls for: 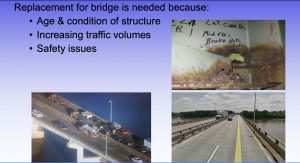 An Illinois Department of Transportation study outlined the major reasons for needing to replace and improve the Interstate 270 bridge. (Photo courtesy of IDOT)

Other projects on state highways include:

Illinois Route 4 — Pavement maintenance or rehabilitation at various locations across southern Madison, St. Clair and Randolph counties including replacement of the highway’s Kaskaskia River bridge. Some work to begin in 2020.

Illinois Route 13 — Pavement reconstruction from Illinois Route 157 to 23rd Street in Belleville and pavement maintenance from Rogers Drive in Freeburg to the Kaskaskia River.

Illinois Routes 157-162 junction — Relocation of the intersection, with reconstruction of the Ill. 157 bridge at Judy Branch Creek Bridge and intersection with Sugar Loaf Road. Improvements or pavement maintenance are scheduled at locations south across St. Clair County into Cahokia.

Illinois Route 159 — Reconstruction of Beltline intersection in Collinsville, replacement of the Douglas Creek Bridge near Smithton, with maintenance at various locations across Madison and St. Clair counties.

Illinois Route 177 — Reconstruction from County Drive to Mine Road in Mascoutah.

Frank Scott Parkway — Additional lanes and a new bridge between Swansea and Shiloh.

The complete IDOT 2020-2025 Proposed Highway Improvement Program can be accessed at https://tinyurl.com/IDOT2025plan

The State Summary of the Program includes a public comment form, as well as information on filing comment by telephone at 800-493-3434.

Additional information about the plan is available online at www.idot.illinois.gov.