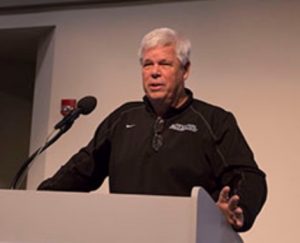 The Lewis and Clark Community College soccer stadium will soon have a new name, the result of decades of tireless dedication from newly retired soccer coach Tim Rooney.

By a unanimous vote from the Lewis and Clark Board of Trustees at their Dec. 12 meeting, the stadium will be renamed Tim Rooney Stadium. Plans for the dedication of the stadium are currently in the works.

The men’s and women’s soccer coach retired at the end of November after 31 years of coaching Lewis and Clark soccer teams.

“Without a doubt, Rooney is one of the greatest NJCAA (National Junior College Athletic Association) coaches of all time, and has certainly left a legacy here at Lewis and Clark,” said L&C Athletic Director Doug Stotler.

“Coach Rooney earned more than 400 wins with both the men’s and women’s teams,” said Vice President of Student Engagement Sean Hill. “Rooney was inducted into the St. Louis Soccer Hall of Fame in 2009 and has been the winningest NJCAA women’s soccer coach since 2012.”

Rooney established the Lewis and Clark women’s soccer tradition by leading the team to win the NJCAA National Tournament Championship in 1999 and 2008 and was named Women’s Coach of the Year both years.

“Coach Ed Huneke, who started the men’s team at Lewis and Clark, was outstanding – those were some big shoes to fill—but Rooney came in and did an outstanding job,” said L&C Trustee George Terry, who played a role in hiring Rooney. “He could recruit like nobody I’ve ever seen, convincing even athletes who had scholarships to attend four-year colleges to play soccer at Lewis and Clark instead.”

“His legacy lives on in the hundreds of soccer players he impacted,” Watson said. “Rooney’s influence on players has gone well beyond their performance on the field.”

“I meet a lot of people from the region who note Tim Rooney’s personal influence on them,” Chapman said. “I would say his talent for character building is equal to his winning record.”

—  Lewis and Clark soccer stadium to be named for Rooney —-