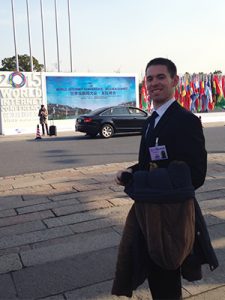 SIUE alumnus Sean Severson, a native of Edwardsville, attended an international conference to discuss internet security safety and development during his graduate studies in China. (Photo courtesy of SIUE)

SIUE alumnus Sean Severson, a native of Edwardsville, attended an international conference to discuss internet security safety and development during his graduate studies in China.

Now proud alums of the SIUE College of Arts and Sciences, both Holloway and Severson currently live in China.

“Life experiences change perceptions,” said Yu. “It is amazing that two of the eight students who went on that trip with us are now 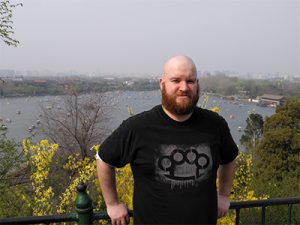 studying and working in China. They made real-world connections, interacted with Chinese students and gained a more globalized worldview.”

Holloway completed a bachelor’s in mass communications from SIUE in 2014. He is working full-time teaching English at a private school in Beijing. Severson achieved a bachelor’s in history at SIUE in 2014, and is now completing a master’s in international relations with a focus on security issues at Zhejiang University in Hangzhou.

“I found both Dr. Yu and Dr. Lavallee to be open-minded 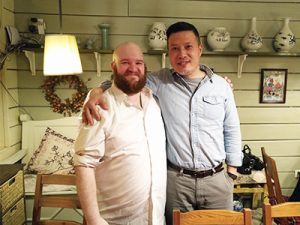 and influential in exposing me to new ideas and opportunities few people think about,” Severson said. “I never contemplated studying abroad or traveling outside of the U.S. But, I decided that going on that study abroad trip would be a once in a lifetime opportunity. I thought it would introduce me to a different and rich culture and society which would broaden my international perspective.”

“I encountered so many things on the trip that impacted me at every level,” he added. “The most profound examples were meeting and cultivating relationships with students and locals to learn about their outlook and point of view, and exploring the city with its more than 2,000 years of history and cultural heritage, especially the west lake, the most identifiable landmark of Hangzhou.”

While he loved traveling, Holloway had never been out of the country prior to his study abroad experience. He recalls the trip as a time of growth, as he pushed through fear.

“The idea of embarking on an immense around the world trip captivated me,” he said. “I had never been challenged like I was during that trip. I found it to be dangerous, lonely and scary since everything I knew was far away. I forced myself to move past those fears, past getting sick and past being tired. It was a time of personal growth.”

He vividly remembers a hiking experience during his trip that led him to a fork in the road. He was exhausted and debated whether to take the marked “easy” path or the “hard” path. He chose the latter and felt secure knowing Dr. Yu was behind him the whole way with a “reassuring voice and presence.”

“I applied to one job that I thought was teaching Chinese people English, in Seattle,” Holloway explained. “But then I heard back and was asked to do a Skype interview for a job teaching English in China. Turns out I would be the foreigner.”

“The thing I love most about my job is that I get to make a difference in these kids’ lives, and teach them something that will better their future,” he added.

Lavallee has regularly communicated with both Holloway and Severson to keep track of their endeavors overseas. This fall, he plans to share their experience with current Chinese language students so they can see what life is like for SIUE alumni living in China.

“I met with Sean in Hangzhou while leading a subsequent travel study with the School of Business in 2015 and in 2016,” Lavallee said. “He met our travel study group with his Chinese classmates to do a day tour with us. We plan to collaborate on research, while he pursues his doctorate in China.”

“David had messaged me through Chinese social media, just to say hello,” Yu said. “Neither of us knew the other was in Beijing. It was a big surprise and of course we wanted to meet. Hearing of his and Sean’s successes in China has reignited my interest in leading future study abroad programs.”

“I deeply believe that the relationship between the countries, not just at the top governmental level, but more importantly, at the grassroots level, makes a positive difference,” Yu emphasized. “Sean and David are both positive influences in other peoples’ lives through their global experiences.”

“Jason has always been a positive influence on me,” Holloway said. “I can honestly say I would not be here in China, working the best job I’ve ever had, if it wasn’t for him.”

One five-week trip changed the course of these alums’ lives. Both are advocates for participating in a global experience during college. Both exemplify SIUE’s mission to develop professionals, scholars and leaders who shape a changing world.

“I would tell students to take every opportunity they can and make the most of their time abroad,” Severson said. “Try to learn and understand the foreign environments you may find yourself in. There is so much to see and explore in this world. Spending time abroad can broaden your perspectives about other countries and the people there.”

“Do it. Go see the world,” Holloway exclaimed. “There is so much we can’t see or learn by staying in our American bubble. Don’t wait for the world to come to you through Netflix. Go find it.”