In the only race for elected office on the Monroe County ballot, Republican Jonathan McLean defeated Democrat Jason R. Jones, by a margin of 8,087 to 3,821, for the office of county clerk and recorder. Longtime county clerk Dennis Knobloch has announced his retirement from office.

Incumbent Monroe County Treasurer Kevin Koenigstein, Sheriff Neal Rohlfing, Supervisor of Assessments Carl Wuertz, and Regional Superintendent of Schools Kelton Davis were all uncontested on the ballot, as was Ron Schultheis — the sole candidate for an open seat on the county board. All are Republicans.

In St. Clair County, Democrat Andrew Lopinot was elected the new county treasurer; defeating Republican Philip R. Kammann, by a margin of 46,868 to 41,356. Current treasurer Charles Suarez did not run for reelection. The office has been the subject of allegations regarding improper procedures.

In Madison County, incumbent Democratic County Clerk Debbie Ming-Mendoza held off a challenge from Republican Stephen J. Adler, by a margin of 54,606 to 48,154.

Incumbent Republican Madison County Treasurer Chris Slusser was elected for the first time to county’s top financial office; defeating Democratic challenger Chris Miller. Slusser was elected to the Madison County Board in 2016. However, he was immediately appointed to the treasurer’s office; replacing Kurt Prenzler, who had just been elected county board chairman.  Slusser received 54,672 votes to Miller’s 45,579. 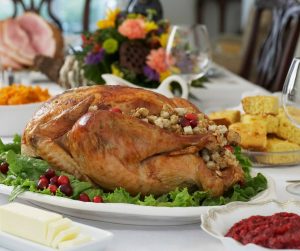 The Urban League of Metropolitan St. Louis will hold its annual East St. Louis holiday turkey giveaway on Nov. 20. (Photo courtesy of U of I Extension)

Recipients must present a picture identification, proof of income, proof of residence and social security cards for all members of the household. For additional information, telephone 618-271-1150.

The drive sends holiday cards and socks to Illinois service men and women, including those currently overseas, reminding them that they are cherished and remembered at holiday time.

The drive is done in partnership with the United Service Organizations (USO) of Illinois, the Illinois Department of Veterans’ Affairs (IDVA), and the Illinois Governor’s Mansion Association.

“Our active duty military and veterans have made countless sacrifices to preserve our way of life, and it is vital that we always remember and support our Illinois heroes,” Rauner said. “Holiday cards and socks are simple gifts that can lift their spirits and show our men and women in uniform that we appreciate their service.”

In addition to cards, the Holiday Hero Drive includes sock donations this year. Participants can send in new tan or black boot socks to USO of Illinois officials, who will distribute the collected socks to deployed troops as well as veterans in Illinois Veterans’ Homes.

“Deployed service members are on their feet a lot, and tan or black boot socks — which can be worn with any uniform — are one of the most requested items, to keep their feet dry, clean and comfortable,” said David Darroch, USO program director.

“This great program will show every service member — soldier, sailor, airman, Marine, and Coast Guard member — that we truly appreciate their sacrifice and service and that they are not forgotten as they continue to serve wherever they are assigned to complete their duty,” IDVA Director Stephen Curda said.

Cards and socks should be mailed now through Nov. 20 to the following address:

Cards and socks also can be dropped off at the Governor’s Mansion, 410 E. Jackson St., Springfield, or with a local Illinois Department of Veterans’ Affairs veteran service officer. Office locations can be found here: https://www2.illinois.gov/veterans/Pages/ServiceOffices.aspx.