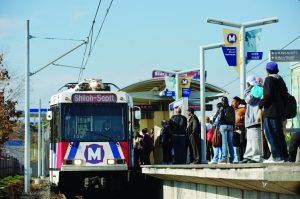 MetroLink light rail trains will be regularly patrolled, for the next six months, by a corps of fifteen uniformed St. Clair County Sheriff’s Department deputies.  That under the terms of a $1.67 million contract finalized Dec. 10 by the Bi-State Development Agency Board of Commissioners.

Under a similar agreement, the St. Louis County Police Department will devote 44 officers, 13 marked police cars and one unmarked unit to MetroLink security, over the same period. Total cost: $4.87 million.

The contracts also give Bi-State the option to hire off-duty deputies or officers, as-needed, for additional patrols or other efforts.

St. Clair County officers, for the time being, will be largely relegated to MetroLink trains and stations in Metro East.  However, plans call for the deputies to eventually be deployed in St. Louis.

In a ground-breaking move, the St. Louis Board of Aldermen last year gave St. Clair County deputies arrest powers within the city – the first out-of-state law enforcement officers ever to be granted such.

However, the deputies still must be certified by the State of Missouri.

The Bi-State board last week also approved a $28.5 million contract with Jupiter, FL-based G4S Security Solutions, which will take over primary responsibility for Metro security on Feb. 1.  The transit line has been contracting for security services with Securitas AB, based in Sweden.

The new contracts are in line with recommendations in a report on MetroLink security, completed in February of this year by New York-based WSP USA Inc.

The security assessment came in the wake of a series of violent incidents on MetroLink trains and platforms over recent years.

House Bill 3902 would have made parts and materials, used for aircraft, exempt from sales tax through the end of 2024.

However, critics say it would have also effectively freed maintenance shops, at various airports around Illinois, from paying up to $50 million in back sales taxes currently owed to the state.

However, Gov. Pritzker vetoed the bill on Nov. 25.

“Giving private aircraft companies tens of millions of dollars in past due tax forgiveness is not the right fiscal decision for our state as we face billions in debt associated with unpaid bills, a multi-billion-dollar structural deficit, and critical needs in schools and public safety services,” Pritzker wrote in his veto message.

Sponsors are now hoping to override the veto.

Proponents say that without the sales tax exemption, aviation maintenance firms here will now be able to compete with shops are other airports around the Midwest.

For the past month, CHS has been accepting donations and funds for its sixth annual Angel Tree giving campaign to benefit students. The donation drive will end Friday, Dec. 13.

“The CHS staff would like to ensure that all of our students experience the joy of the holiday season,” said Anne DeToye, CHS treasurer. “To that end, we are asking people to participate in our Angel Tree giving program.”

“This year, we are giving out a uniform sweatshirt and school supplies to all students,” said Pamela Saffore, CHS guidance counselor. “Extra gifts and additional winter gear will be given to our neediest students.”

Checks should be made payable to SIUE Foundation and sent to Anne DeToye at Campus Box 1049.  Please drop off any cash donations to DeToye in Alumni Hall, room 1134. The SIUE Foundation is a 501(c) (3) organization. Contributions are tax-deductible to the extent allowable by law. 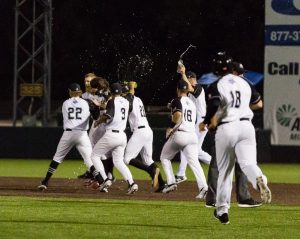 Despite winning the Frontier League championship in 2019, the River City Rascals ceased operations after being evicted for nonpayment of rent at the city-own baseball park in O’Fallon, Missouri. (Photo courtesy of River City Rascals)

In addition to the superintendent of the Belleville high school district, Dosier serves as president of the Greater Belleville Chamber of Commerce. In the past, he has served on the board of McKendree University in Lebanon and as a representative of District 201 to the St. Clair County Career and Technical Education System.

The task force held an organizational meeting in November and its first regular meeting last week.

A petition drive, launched Thanksgiving Day, seeks to effectively force city officials to allow renovations to the former hotel and the reopening of the building as a church and homeless shelter.

In 2018, city officials closed the center — for decades the region’s largest homeless shelter — citing overcrowding and violation of its operating permit.

The center regularly housed 300 people per day, according to Rev. Rice.

Since the closing, the St. Louis region has seen a marked increase in homeless panhandlers around major intersections and public spaces, local police say.

Supporters of Rev. Rice’s supporters say the center was actually closed as an act of political retribution against the longtime activist minister. Rev. Rice has frequently criticized the city for inadequate social service spending.

The petition, requiring 25,000 signatures, would place a proposition to reopen the center before St. Louis voters.

St. Louis officials say there are 930 year-round emergency or transitional housing beds for the homeless at shelters across the city.

However, NLEC proponents say many of those beds are difficult for homeless people to access. The nearby St. Patrick’s regularly operates at two thirds or less capacity, they say.

Often, at fiscal year’s end, the City of St. Louis has returned to its general fund, almost all of the funding budgeted for homeless services.

In what the trade journal, Ballpark Digest, describes as a “major shakeup” in independent baseball, the Sauget-based Frontier League has taken over operation of the Dayton, Ohio-based Can-Am League.

Beginning with the 2020 season, the Frontier League will have a total of 14 teams; with seven teams in a newly established Can-Am division and seven in a new Midwestern Division.

The Frontier League is now eyeing additional expansion in the U.S., from the east coast to the Mississippi River, and in the Canadian provinces of Ontario and Quebec.

The league lost one team this year. Its River City Rascals ceased operations after being evicted for a second time by O’Fallon, Missouri., officials for nonpayment of rent at the city-own baseball park.