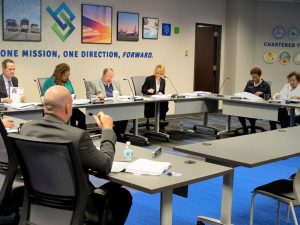 The Bi-State Development Agency Board of Commissioners approved the agency’s Operating and Capital Budget for Fiscal Years 2021 – 2023, during its first-ever virtual meeting on April 24.

It provides funding for a stepped-up regional transit security plan, under which MetroLink trains and Metro buses will be patrolled system wide by St. Louis and St. Louis County police, as well as St. Clair County Sheriff’s deputies and Bi-State security personnel.

Also approved during last week’s meeting: a 10-year extension of an Intergovernmental Agreement between Bi-State Development and the Madison County Mass Transit District (MCT), under which Bi-State acts as a conduit for federal funding.

Due do to COVID-19 pandemic, Bi-State is now making its Board of Commissioners meetings, along with public comment forms, available on the Public Meetings website page (www.bistatedev.org/public-meetings).

Video of board meetings will be available for viewing, after meetings conclude, on the Bi-State Development YouTube channel.

The Southern Illinois University School of Medicine’s COVID-19 Remote Patient Monitoring Program has been extended to Southern Illinois, with a specialized Pandemic Health Worker team now based in Alton to provide in-home care for suspected and non-hospitalized coronavirus patients in underserved communities.

Designed to keep downstate hospitals from being overwhelmed by COVID-19 patients, the program provides virtual medical support for individuals who are showing COVID-19 symptoms or are at high risk of contracting the virus, but do not require emergency or inpatient care.

For those determined eligible, a pandemic health workers team will digitally assess patient condition, provide daily virtual check-ins, and follow up over a 14-day period.

For patients who need them, the health workers will deliver medicine, as well as wellness kits with essential tools to monitor health (including thermometers, pulse oximeters, blood pressure cuffs, and alcohol wipes.)

In addition to Alton, pandemic health worker teams have now been deployed in the communities of Springfield, Carbondale, Decatur, and Quincy.

The services are provided without regard to insurance coverage. 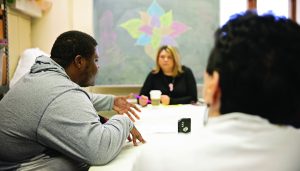 A pair of Madison County officials, terminated this month for alleged political espionage, say their firing was itself the result of clandestine political maneuvering, designed to hurt the reelection campaign of Republican County Board Chairman Kurt Prenzler.

“The taxpayers will likely now have to spend hundreds of thousands, if not millions of dollars defending lawsuits and perhaps paying judgments,” Prenzler said.

The county board voted to terminated County Administrator Doug Hulme and IT Director Rob Dorman April 16 during a special meeting.

Termination came on a 26-1 board vote, following a lengthy executive session. Prenzler voted no (although the board chairman’s vote is counted only when needed to break tie votes and is not reflected in the vote on the terminations).

Both Hulme and Dorman characterize the terminations as unwarranted and have indicated they plan to mount challenges.

Prenzler called the special board meeting, citing need for due process in employee disciplinary matters, after county Democrats alleged that Hulme and Dorman had improperly opened emails and other documents in the county IT system.

Their purpose, Democrats allege, was to gain adverse information on Democratic candidates for county office.

Prenzler also ordered an independent investigation into the allegations, which he believes will ultimately show Hulme and Dorman were in noncompliance with county policies and procedures.

The Democrats’ charges are based on evidence gathered during a surprise, January 2018 Illinois State Police raid on Madison County offices, conducted at the behest of State’s Attorney Tom Gibbons (D).

Court records related to the case were unsealed on April 6.

Despite a two-year investigation, no charges were issued as a result of the raid.

“Please do not confuse the actions by the county board with any legal actions against me. The county board is a political body and their choice to terminate me was a political decision,” Hulme said in a written statement to area media. “The legal battle over the investigation I have already won and have been cleared by the Attorney General of the State of Illinois.”

County Democrats have also called for the termination of Steve Adler, who has been appointed to lead Madison County’s response to the coronavirus. However, Adler has not been the subject of action by Prenzler or the county board.

Knobloch appointed to Monroe County Board

The Monroe County Board of Commissioner on April 20, appointed retired county clerk Dennis Knobloch to fill a vacant seat on the board through this fall.

He was nominated by the Monroe County Republican Central Committee during its annual county party meeting, April 15. County Democrats did not nominate a candidate for the appointment.

In results of other annual county political party meetings across Metro East, the Madison County Democratic Party has chosen local labor organizer Randy Harris to lead a new slate of officers for the 2020 election cycle. They are:

Michael ‘Doc’ Holiday and Rick Fancher will serve as sergeants-at-arms and Tonya Genovese as party counsel.

“I am excited to pass the baton to this leadership team,” said outgoing Party Chairman Mark Von Nida.

Despite the COVID-19 pandemic, county-level Democratic and Republican political organizations across Metro East convened conventions this month, as required under Illinois law — although generally by way of Zoom or teleconference.

An exception: the Monroe County Republican Party which met in a Waterloo parking lot, with participants maintaining six-foot social distancing.

Precinct captains for established county political party organizations are required under the state constitution to hold conventions within 29 days after an election – in this case, the March 17 Illinois primary – to elect a chairman and in some cases other officers, consider bylaws changes, and appoint candidates to fill vacant slots on party ballots.

Those finalized ballots were submitted to the Illinois State Board of Elections for certification at its April 17 meeting.

New and independent parties have until June to name their candidates for the Nov. 5 general election.

Finalized general election ballots will be released in August, according to ISBE spokesperson Matt Dietrich.

However, the district’s fixed route No. 7 MetroBus service to Fairmont City will be discontinued on June 15, due to low ridership, the SCCTD also announced.

District officials believe the new ride-share service will be sufficient to meet demand for public transit in the Fairmont City area; adding present fixed-route bus riders will have six weeks to learn about the new service.

The SCCTD Flyer is a door-to-transit and transit-to-door service designed to help “close the sometimes-lengthy gap that can exist” between transit stops and homes, workplaces, schools, healthcare facilities, shopping establishments and entertainment venues, according to a district statement.

The service is available weekdays between 6 a.m. to 7 p.m. and can be scheduled by calling (618) 800-6884 or downloading the TransLoc app, which is available through the Apple Store or Google Play.

Passes can be purchased through the app, the East St. Louis Township Building, Gateway Market, Neighbors Marketplace, or the Quick Bite at the Belleville MetroLink Station. No cash fares will be accepted.