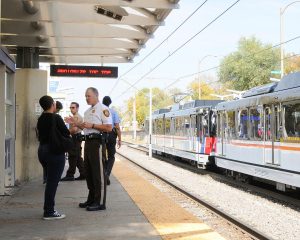 The Bi-State Development Agency has reached roughly the halfway point in a program to improve security on its MetroLink light rail lines, according to the second in a series of quarterly reports by the East-West Gateway Council of Governments (EWG).

The assessment of Bi-State’s security systems came following a series of violent incidents on or near MetroLink trains or boarding platforms.

They included assaults and strong-arm robberies on trains in St. Louis and St. County, the shooting of a moving Metro Link car as it passed through Washington Park, and a disturbance on the French Village MetroLink boarding platform in Fairview Heights.

In response to growing transit security concerns, the EWG initiated the system-wide security assessment in March 2018.

A group of four transit security professionals from around the nation offered their expertise and guidance as part of a peer review process.

In addition to the security improvement recommendation, a phase one report, released by the consultant in February 2019, included an inventory of present MetroLink security assets and a review of security practices among other transit systems across the nation.

Late last year, EWG issued the first in a series of quarterly Metro Security Scorecards, designed to track phase two of the assessment process: implementation of the recommended security measures.

The second scorecard in the series, posted to the EWG website, shows the Bi-State progress on assessments as of Dec. 31,2019: 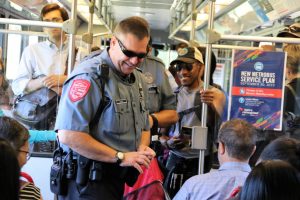 Security officers onboard a Bi-State bus. A new Metro security task force and new contracted security firm are largely in-place by “not fully realized,” according to the Metro Security Scorecard. (Photo courtesy of Bi-State Development Agency)

Surveying progress on recommended security strategies, the scorecard notes that Bi-State and its partners have essentially implemented an “all hazards approach” to MetroLink passenger wellbeing; coordinating security, safety, and emergency management programs.

Still only half-completed are an overall strategic security plan, definitions of roles and responsibilities for the various law enforcement agency patrolling MetroLink, and a security data system.

Work on a unified communications system for the various elements of MetroLink security and an integrated emergency management plan have only been started.

There has been no progress on the security plan’s ultimate goal — “depoliticize the conversation about Metro security” — the report acknowledges.

Under the heading of police and security staffing, a new Metro security task force and new contracted security firm are largely in-place by “not fully realized,” according to the report.  So are personnel reforms designed to help existing Metro security staff work more cooperatively with law enforcement agencies and be more rider-oriented.

However, a separate package of recommendations, on the “rebranding” of Metro policing and security and this disarming of Metro security guards, remained only partially implemented at year’s end.

The same with recommendations on security staffing, planning, budgeting, deployment, and measures and relationships-building among security staff.

The assessment’s three “procedures and training” recommendations — standard operating procedures, a passenger code of conduct, and improved training for security staff — remain only half implemented, according to the scorecard report.

With non-ticketed riders blamed for numerous violent acts on MetroLink lines, fares and fare enforcement have become among the most publicly debated aspects of security improvement.

A new set of fair policies, and authority to enforce them, are nearly in place, according to the report.

However, measures to inform riders of fare policies, and operational strategies to enforce them, remain only about half-implemented overall.

Deployment of handheld fare validation devices and firm measures to tack fare evasion, likewise, are only halfway to implementation, the report indicates.

With MetroLink widely criticized for a lack of turnstiles at stations to keep out unauthorized rides, environmental design improvement has become another of the most anticipated Metro security reforms.

However, station design remains the aspect of security improvement on which the least progress has been made, according to the scoreboard report.

Establishing of paid-fare-zones on boarding platforms and elimination of “dead space zones,” which are prone to loitering, has begun. Maintenance at boarding platforms is improving and “wayfinding” improvements — such as better directions and station names — are underway, according to the report.

But signage, lighting, sight line and security design improvements — designed to bring MetroLink in line with American Public Transportation Association (APTA) standards — remain only about quarter of the way to implementation, according to the report.

A new Metro Security Strategy and supporting documents are still expected to be finalized in spring 2020, according to the report.

The complete Metro Scorecard report can be accessed at https://tinyurl.com/MetroScorecard